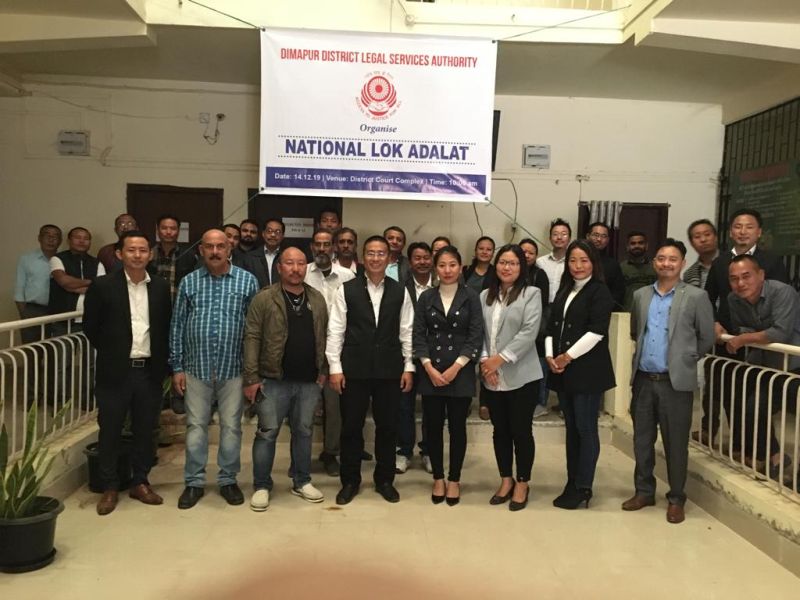 Members of Dimapur District Legal Services Authority after the observance of National Lok Adalat on December 14.

Dimapur, December 14 (MExN): District Legal Services Authorities (DLSA) in all the district headquarters observed the National Lok Adalat (Peoples Court) in concert with the rest of the country on December 14.

A total of 11 Lok Adalat Sitting benches were constituted for settlement of various disputes by bringing compromise between the parties through Lok Adalat conciliators and members presided over by a sitting Judicial Officer.

In total, 136 disputes/cases were listed and taken up at the Lok Adalat, said a press release received here. A total of 92 disputes and cases were disposed off amicably. Settlement amount was also involved in some cases which in total amounted to Rs 83,68,901 (eighty three thousand sixty eight thousand nine hundred one) only.

This Settlement Amount is the amount mutually agreed for payment between the litigants (or) parties who are involved in a dispute where theparties on arriving at a consensus or willing amount to settle the disputes for the damaged caused or a negotiated amount for payment on a claim by a party.

Settlement amount also included the fine money, bank recovery money, money suits, compensation money, etc. Among the cases dealt and disposed, most of them were bank recovery cases, civil cases. 10 cases of Motor Vehicle Accident Compensation cases pending before the MACT, Dimapur were taken up and all 10 cases were disposed in this Lok Adalat.

A press release issued by the Lok Adalat Wing, Nagaland State Legal Services Authority (NSLSA) stated that the pervasive effort made by the District judges, Chief Judicial Magistrate and Civil Judges who acted  as presiding officers and thePanel Lawyers& Advocate  as conciliators along with the Para legal Volunteers who acted as members was commendable in disposing cases and thereby reducing the burden of case pendency in the courts.

The officials of the bank of various branch, various insurance companies and institutions were also commended  for their amenable participation in the  Lok Adalat, which resulted in quick and inexpensive settlement with a significant number of Bank recovery cases settlement, it added.

Lok Adalat is a platform for the people based on the principle of serving justice on equal opportunity basis, compromise, conciliation and fair play. The release added that it was not at all a substitute to the present justice dispensation system, but rather a complimentary to achieve speedy justice and a binding resolution. Lok Adalat is less inexpensive than the regular court based litigation.

A person can bring a dispute or case before Lok Adalat for settlement if the dispute is not yet brought before any court, either party to the dispute may submit an application before the Chairman (or) Secretary of the District If For pending cases in courts, Court may itself refer a case to Lok Adalat on its own if it considers the case to be fit for settlement in Lok Adalat.The litigants would get the same justice, which they get in the Court concerned. The litigants may get their disputes settled only when they are satisfied with the compromise proposed by the Conciliators. If they are not satisfied, they are at liberty to proceed with their case before the court concerned.