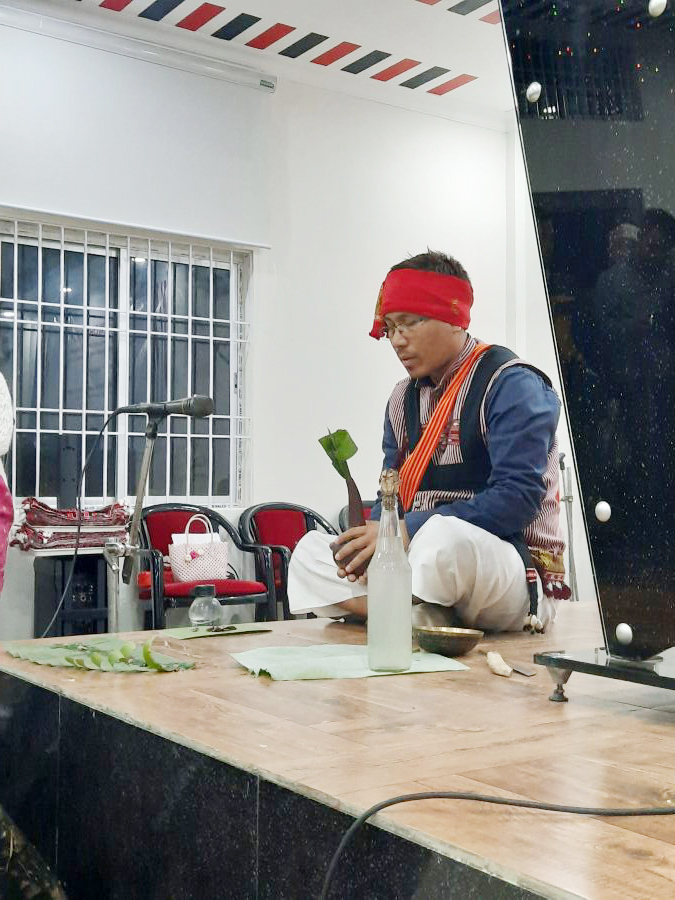 A priest performs a ritual of Tirim Chingduk during the Workshop on Indigeneity and Liminal Ontologies in Diphu  on January 14.

Organized by Centre of Karbi Studies (CKS), Karbi Anglong Autonomous Council (KAAC) in collaboration with Department of Estonian and Comparative Folklore, University of Tartu, Nordic Centre in India (NCI),  the event marks the first time that an international workshop has been organized and hosted in Karbi Anglong, stated  a press release received here.

In the workshop, Dharamsing Teron, Director of Centre for Karbi Studies pointed out that “this domain is not just the domain of the living beings.”

Two priests performed the ritual of Tirim Chingduk that involved chanting to the ancestors to invoke their blessings before any auspicious event.

The gravity of the event and the scope it signified for the progress of the community was highlighted by speakers from the community like Tuliram Ronghang, CEM of KAAC, Horensing Bey, MP and Elwin Teron, Advisor to the CEM who spoke about the rich potential that Karbi Anglong has for academic researchers and scholars.

They were hopeful that the workshop will expand research done on the Karbi community which has so far been limited to work by colonial anthropologists, added the release.

Ülo Valk, Chair, Department of Estonian and Comparative Folklore, University of Tartu pointed out that Karbi Anglong with its rich and complex heritage serves an important site of research on liminality.

He underscored that he was here to learn from Karbi people as they are the carriers and experts of Karbi Culture. The workshop will continue for three days from January 14-17.