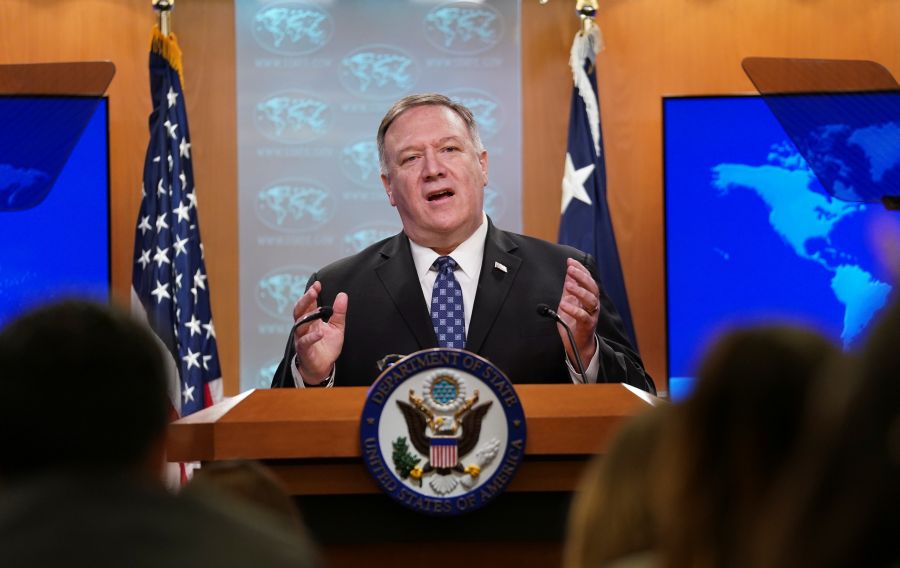 U.S. Secretary of State Mike Pompeo speaks to reporters during a briefing at the State Department in Washington, US on February 25, 2020. (REUTERS Photo)

WASHINGTON, February 26 (Reuters): Afghanistan's government has agreed to postpone President Ashraf Ghani's inauguration to a second term, the United States said on Tuesday as it declined to recognise competing election victory claims by Ghani and his chief political foe.

The postponement could allow more time for U.S. diplomats and others to mediate a resolution to a political crisis that threatens a peace process due to see the United States and the Taliban sign an accord this weekend on a U.S. troop withdrawal.

U.S. President Donald Trump has made an end to foreign wars a major goal. But Afghanistan's political crisis could deprive him of a significant foreign policy win as he seeks re-election in November.

On Feb. 18, Afghanistan's Independent Election Commission said that Ghani won 50.64% of a Sept. 28 vote beset by allegations of rigging, technical problems and other irregularities. It named his opponent, Afghanistan Chief Executive Abdullah Abdullah, runner-up with 39.52%.

Abdullah rejected the results, claimed to be the victor and vowed to name a parallel government.

Abdullah's spokesman Fraidoon Khwazoon told Reuters by phone on Tuesday that the "the swearing in ceremony" of Ghani and Abdullah would be postponed for two weeks "in order to support the peace process."

U.S. State Department spokeswoman Morgan Ortagus said in a statement that the United States "notes" the results announced in Ghani's favour. But she stopped short of recognising either man's victory claim.

Instead, she said that "concerns have been raised about the election process" and that Washington expected the issues "to be handled in accordance with constitutional and legal procedures."

The United States, she said, sought the formation of an "inclusive" government representing all Afghans, and called on political leaders to ensure that political debate was calm and "free from the use or threat of violence."

The Ghani government, she said, agreed to postpone his inauguration for a second five-year term - set for Thursday - to provide time to settle the crisis and the appointment of a delegation to hold peace talks with the Taliban, she said.

On Monday, two sources told Reuters the United States wanted Ghani to defer his inauguration, concerned it would fuel the election crisis and threaten the peace process.

Asked if the United States had a role to play in the Afghan political crisis, Pompeo told reporters that the chief U.S. mission was security.

"There's an Afghan Constitution. We want to make sure it's followed ... validate that those elections were free and fair and accurate and the tally was right" he continued.

"We're on the cusp of an enormous, enormous political opportunity," Pompeo said, saying Washington would not let any group "spoil it."

Pompeo's comments put Washington at odds with its European allies, many of which have troops in Afghanistan. The 27-member European Union recognised Ghani's re-election victory on Feb. 19.

The crisis threatens a U.S.-led process to end decades of war in Afghanistan that was boosted this week with a seven-day reduction in violence. Signing of the U.S. troop withdrawal deal would be followed by inter-Afghan peace talks.

Washington would sign the agreement on Saturday with the Taliban if the reduction in violence was successful, Pompeo said. He also said Washington expected the peace talks between the Taliban and a delegation comprising government, opposition and civil society members to lead to a new government.