While there was marginal improvement in overall score, on some key categories, Nagaland’s status declined from last year including some domains in which the State traditionally scored strong.

The third edition of the SDG India Index and Dashboard 2020–21 was launched by NITI Aayog Vice Chairperson Dr Rajiv Kumar in New Delhi on Thursday. 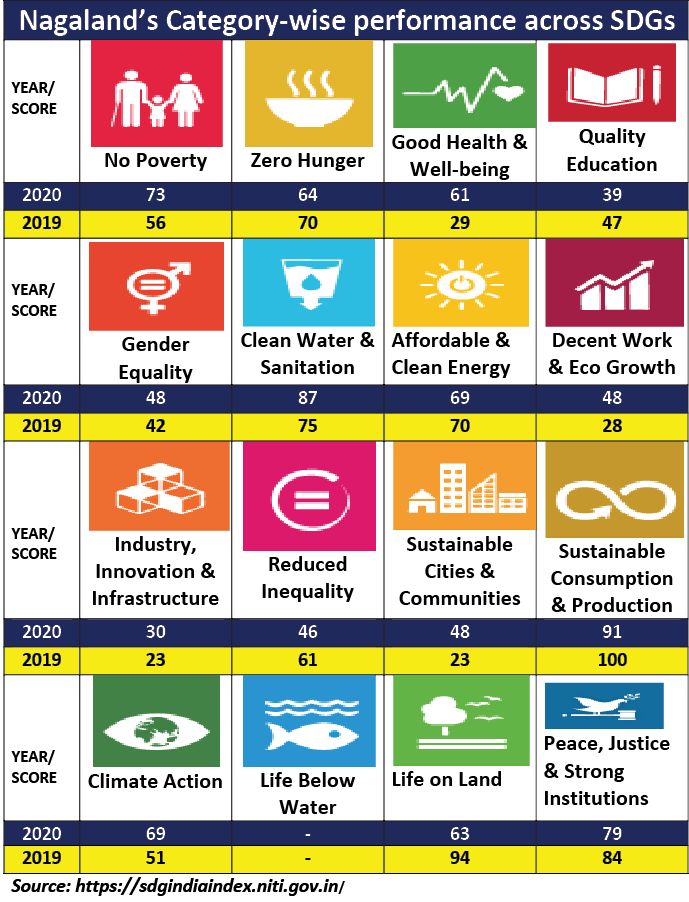 Since its inaugural launch in 2018, the index has been documenting and ranking the progress made by States and Union Territories (UTs) towards achieving the SDGs.

The SDG India Index 2020–21, developed in collaboration with the United Nations in India, tracks progress of all States and UTs on 115 indicators that are aligned to Ministry of Statistics and Programme Implementation’s National Indicator Framework, NITI Aayog said in an official release. The 115 indicators incorporate 16 out of 17 SDGs, with a qualitative assessment on Goal 17, it added.

Overall score
With a total 61 out of possible 100 Index score, Nagaland was ranked a ‘performer’ along with 13 other States. It was below the national average of 66.

While it is slight improvement over last year’s score of 57, Nagaland was slotted in ‘Bottom-5’ among the States along with Chhattisgarh, Odisha, Arunachal Pradesh, Meghalaya, Rajasthan, Uttar Pradesh, Assam, Jharkhand and Bihar.
Kerala retained top position among the States with a score of 75, followed by Himachal Pradesh and Tamil Nadu with same score of 74.

Meanwhile, among the UTs, Chandigarh topped the index with 79 points, followed by Delhi (68), Puducherry (68) and Lakshadweep (68). Dadra and Nagar Haveli & Daman and Diu was ranked lowest among the UTs with a score of 62.

Category-wise Performance: Concern areas
In 2019, Nagaland scored 100 out of 100 in ‘Sustainable Consumption & Production’. However, the score declined to 91 in 2020.  Among others, the indicators under this include usage of nitrogen fertilizer out of total NPK (Nitrogen Phosphorous Potassium), Per capita fossil fuel consumption (in kg), Hazardous waste generated per 1,000 population, Plastic waste generated per 1,000 and so on.

However, with a score of 91, it was still the second best performer after Tripura among the States and UTs.

Another category where the State scored strong but showed declining trend was “Peace, Justice and Strong Institutions.”  It declined from 84 in 2019 to 79 in 2020.

Some of the indicators in the category are murders per 1,00,000 population,  crimes against children, number of victims of human trafficking, missing children, Cases under Prevention of Corruption Act and related sections, population covered under Aadhaar and so on.

The biggest fall was seen in the context of ‘Life on Land’ from 94 in 2019 to 63 in 2020. The category assessed, among others, Forest cover and Tree cover as a percentage of total geographical, area covered under afforestation schemes, degraded land over total land area and cases under Wildlife Protection Act (1972).

While Nagaland had second highest percentage of land degradation, desertified area increased by more than 1 lakh hectares in the State, the report said.

Another area of concern was the poor performance in ‘Reduced Inequality’ category where the State’s score declined from 61 in 2019 to 46 in 2020.

Some of the indicators in the category include percentage of population in the lowest two wealth quintiles, elected women over total seats in Lok Sabha and State Assemblies, seats held by women in Panchayati Raj Institutions (PRIs).
Significantly, a total of 42.9% of the population in Nagaland are the lowest two wealth quintiles, as per the report.
Nagaland’s performance in quality education deteriorated further from 47 in 2019 to 39 in 2020.

The category assessed Adjusted Net Enrolment Ratio in elementary education (class 1-8), dropout rate at secondary, Gross Enrolment Ratio in higher secondary, percentage of persons with disability who have completed at least secondary education, Gender Parity Index  for higher education, literary rate (15 years and above), percentage of schools with access to basic infrastructure (electricity, drinking water) and so on.

Among the States, Nagaland was beaten to the bottom by Bihar while the State has the lowest enrolment ratio of 67.38 percent among the States at elementary level.

In addition, Nagaland’s performance in enabling ‘Zero Hunger’, though high, also decreased from 70 in 2019 to 64 in 2020.  The indicators include percentage of beneficiaries covered under National Food Security Act; percentage of children under five years of age who are underweight, stunted; and percentage of adolescents aged 10–19 and pregnant women aged 15-49 years who are anemic etc.

Falls in key indicators calls for redoubling effort by all stakeholders in not only curbing and reversing the declining trends in those categories the State was performing well earlier, but also catching up and improving upon on others, in which the State is lagging behind.