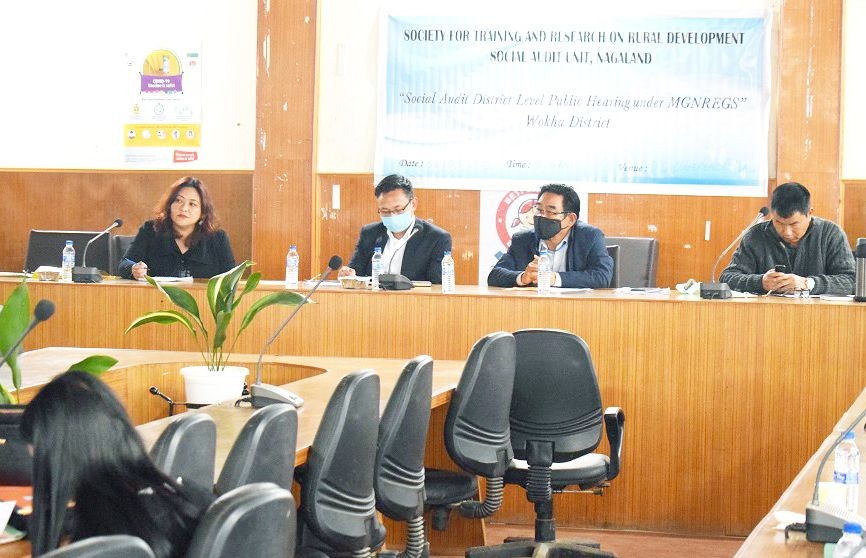 The VRPs/BRPs/DRPs presented the findings of village wise report of the social audit. Some of the observations given are, in most of the VDBs documentation and records maintenance is found to be poor. Number of job cards does not tally with MIS because of deletion of bogus deceased and migration etc. Three phase photographs in hard copy are to be maintained at the VDB level. It was pointed out that in some of the VDBs Gram Sabha and Rozgar Diwas are not held regularly.

After proper discussion and deliberation following rectification measures and instruction were given to the blocks and VDBs for necessary correction. Shelf of projects to be maintains properly and implemented. Involvement of all job cards holders in the planning process is to ensure. Rectification letter for the unresolved issues in the Gram Sabha were submitted by the concerned BDOs during the Public Hearing meeting.

During the audit, SAU Nagaland, Imlirenla Sanglir emphasized on the importance of maintaining documents like master roll, measurement book, job card and cash book properly. She said that the main purpose of social audit is fact finding in the implementation of schemes to facilitate accountability and transparency.

EAC, I Yentinoungbou who represented the District Administration as independent Observer, in his response, he emphasized the importance of proper implementation of the proposed scheme in the shelf of projects and proper maintenance of records and documents is an essential component to reflect accountability and transparency.

Project Director, K Shekiho Phuleshe has explained the importance of social audit and it’s Implication. He further said that in the Public Hearing shortcoming and loopholes are pointed out for necessary corrective measures. He requested all the concerned BDOs and VDBs to put in action all the corrective measures and pointed out that same mistake should not be repeated in future.

During the audit, resolutions were adopted for proper maintenance of records in all the block level for smooth functioning and successful implementation of projects. All the VDBs should maintain proper documentation and records. Gram Sabha and Rozgar Diwas should be conducted on regular basis. In the event of change of VDB Secretary all documents, records, file Job cards muster roll etc should be handed over to the new VDB Secretary.

Three phase photos in hard copy to be maintained in the VDB Office. From time to time proper awareness/training on documentation and implementation of MGNREGA should be conducted for the new VDB Secretaries. Job cards should be updated properly. All necessary documents should be maintained properly and produced to the auditors promptly. All VDBs should mandatorily put up Transparency Board and wall painting to be done. There should be no project diversion unless in emergency cases owing to natural calamities.