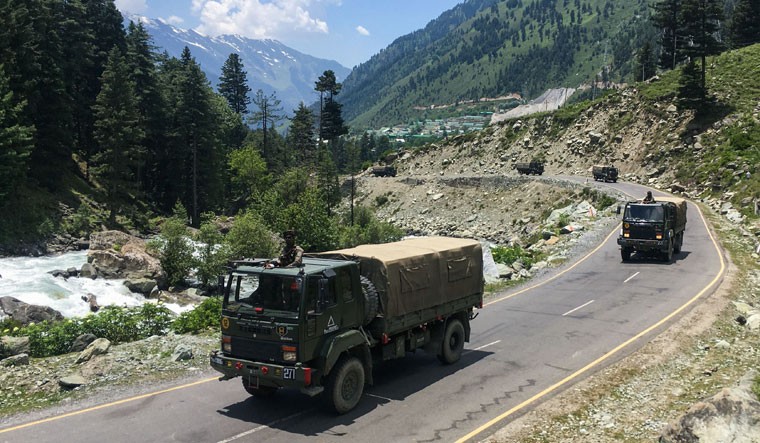 Leh, July 6 (IANS) Around 30,000 troops of Indian Army are in an eyeball-to-eyeball confrontation with Chinese troops along the Line of Actual Control (LoC) in Ladakh, following the additional deployment of three brigades since the violent face-off last month.

Highly placed sources told IANS that in normal times six brigades, that is two divisions are maintained along the LAC in Ladakh, even as troops are deployed in and out on a rotation basis. However, after the June 15 violent clash, in which 20 Indian soldiers including a commander was killed and over 70 soldiers injured, the Army called for three additional brigades (each brigade constitutes around 3,000 troops and support elements).

Around 10,000 troops for the three additional brigades were brought from Punjab, Himachal Pradesh and Uttar Pradesh, sources said. In all, sources said, there are three Army divisions along the LAC under the XIV Corps Command, as of today. The XIV, the biggest corps of the Army in India, was set up during the 1962 war with China.

Sources said some para special forces which played a key role in the 2017 surgical strikes against Pakistan, have also been sent to Ladakh. The Indian para troopers come from over a dozen special forces regiments who are trained in high-risk operations in extremely difficult terrain. Similarly, five battalions of Ladakh scouts, an infantry regiment of the Army, is operational for support in the mountain warfare.

Since the violent clash in the Galwan valley, the Indian Army reinforcements have been backed by its M-777 ultra-light howitzers bought from the US, sources said. The American howitzers, sling-loaded to helicopters, are known for their precision artillery fire up to a range of 24-30 kms in mountainous regions.

To support the Army's forward deployments like the Daulat Beg Oldie (DBO) sector along the LAC, sources said, C-130J Super Hercules aircraft are being used. The DBO, the world's highest runway, stands at 16,614 feet, and 8km from the LAC in north-eastern Ladakh.

Navy's P-8I aircraft generally used for maritime patrol and reconnaissance, sources said, are being used in Ladakh for high altitude surveillance. Sources said the P-8Is carried out similar surveillance operations during the 2017 India-China standoff in Doklam in Sikkim.

The Army, sources said, is pretty satisfied and confident with their deployments in Ladakh. "We have got everything that a modern Army requires. Any aggression from the Chinese side can be retaliated more than adequately," a source said.

The entire built-up is along the 865 km-long Line of Actual Control (LAC) which acts as border with China since most of the region has been occupied by the People's Liberation Army (PLA) over time. China occupied Aksai Chin, a part of Ladakh union territory, that is, 38000 sq km, in 1962 war. The Chinese Communist Party regime has also occupied Tibet (1.2 million sq km), which borders Ladakh.

On the map though, India shares a 3488 km-long international border with Tibet under China, in eastern sector (Sikkim and Arunachal Pradesh), centre (Uttarakhand and Himachal Pradesh) and western sector (Ladakh).