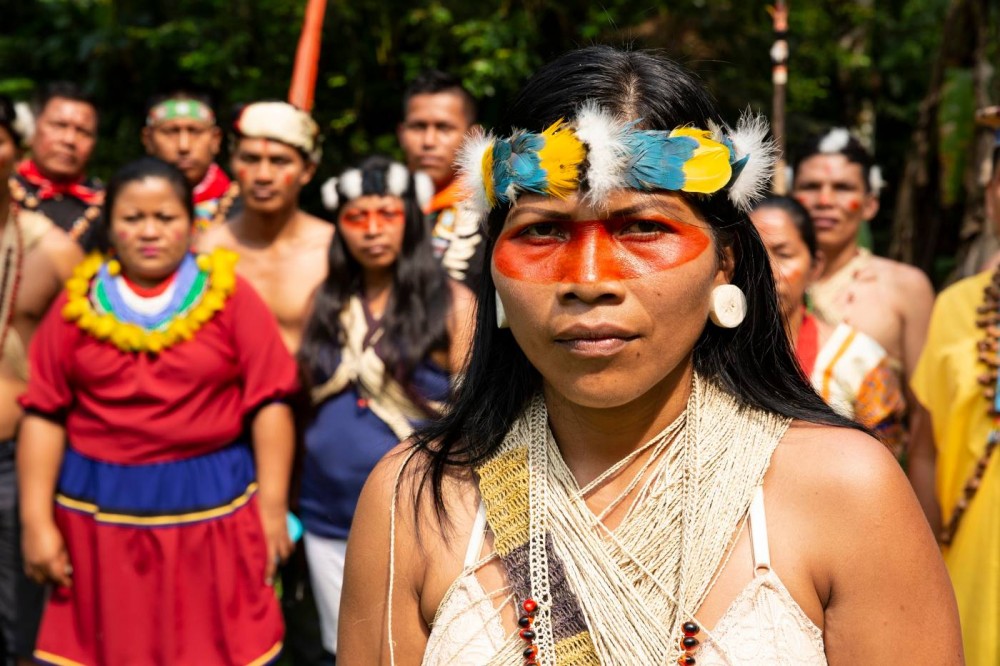 Nemonte Nenquimo, first female leader of the Waorani, won a landmark court case to protect half a million acres of rainforest

BOGOTA, November 30 (Thomson Reuters Foundation) - As a girl growing up in Ecuador's Amazon rainforest, Nemonte Nenquimo would listen to stories passed down from her ancestors about how the Waorani indigenous people preserved their forests and defended their lands from settlers and oil companies.

Those tales of survival and resistance later inspired Nenquimo to become a leader of the Waorani people and win a historic court case to protect 500,000 acres (202,000 hectares) of Amazon rainforest from exploitation by oil companies.

On Monday, Nenquimo's activism and leadership earned her a prestigious Goldman Environmental Prize - known as the "Green Nobel" - which honors grassroots activism, along with five other winners.

"What happens on our territory is our decision. Our territory is not up for sale," Nenquimo, 35, told the Thomson Reuters Foundation in a Zoom interview, wearing traditional red face paint.

"We come from here. It's our home ... which our grandfathers have defended for thousands of years."

Last year, an Ecuadorian court ruled that the government had failed to properly consult with the 4,000-strong Waorani people back in 2012 before holding an international auction to sell 16 oil blocks that run through ancestral lands in the country's eastern jungle.

The landmark court decision means the government has had to suspend the selling of the land for oil extraction.

"This was a victory not only for the Waorani people but for all of Ecuador's Amazonian indigenous people. It was a victory in favor of life," said Nenquimo, who is the first female president of the Waorani Pastaza Organization.

Born in the jungle, a young Nenquimo would go fishing, collect food from the forest, bathe in waterfalls, and learn about traditional plant medicine from her parents.

She also witnessed how disease brought by white Christian missionaries who first made contact with the Waorani people in the 1950s led to the death of her grandfather and other relatives from polio.

The missionaries brought with them the Bible, a new language and schools that Nenquimo says she rejected because the lessons went against what her parents had taught her about nature.

Such childhood experiences deepened her resolve to protect the Amazon rainforest, which scientists say is crucial in the fight against climate change as trees are a major store of planet-warming carbon.

Spanning nine countries in South America, the Amazon faces worsening fires and clearing for agriculture and mining. About 15-17% of the original forest has been destroyed, mostly since the 1970s, scientists warn.

"Everything we do is also about defending the planet, the air we breathe. Humans can't live without water, without air," said Nenquimo, who was also named one of TIME magazine's 100 most influential people of 2020.

To help conserve the rainforest, Nenquimo began working with other indigenous tribes living in the Ecuadorian Amazon and co-founded the nonprofit Ceibo Alliance.

"We would hear from the companies and government that drilling for oil would bring development in terms of health and education," Nenquimo said.

"But, in reality, it's very sad to see indigenous people who had vast lands, healthy forests and unpolluted rivers ... which are now deforested and their water contaminated."

As part of her campaign to prevent the auction and sale of the forest to oil companies, Nenquimo led a project to map ancestral lands using a Global Positioning System (GPS), drones and cameras that took nearly three years to complete.

"We made our own map of our lands with the help of our guides and grandfathers," she said.

"This work was very important to us as it allowed us to make our land visible to the government."

Announced in San Francisco, California, the Goldman Environmental Prize, worth about $175,000, is given to each of the six winners to support their environmental activism and continue local campaigns.

Fellow prize winners include Chibeze Ezekiel, a Ghanaian anti-coal campaigner, and Paul Sein Twa, an indigenous environmentalist of Karen descent from Myanmar who spearheaded the creation of a 1.35 million-acre (5,485 sq km) conservation zone, among others.

Nenquimo said deciding how the prize money is spent will be done by holding an assembly and making a "collective decision."

She would like to see it invested in education and providing training and seeds for indigenous communities to grow non-traditional food crops, like peanuts, which would give communities new ways to earn money, and to set up fish farms.

Nenquimo vowed to continue her fight to preserve the Amazon, drawing inspiration from her young daughter to ensure she and future generations can live peacefully on their lands.

"Mother Earth isn't waiting for us to save ourselves. The only thing that Mother Earth asks is that we respect her, and that's what we are doing," Nenquimo said.