Amid COVID-19, menace of single use plastic resurfaces 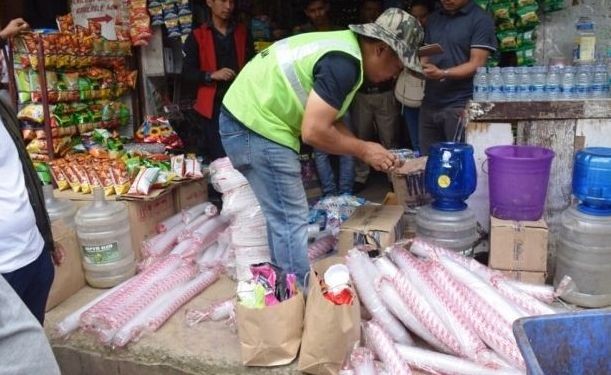 The ban gained momentum as usage of single use plastic both by the vendors and public lessened to an extent.

However, with the COVID-19 pandemic and the lockdown, the efforts of the government and its agencies and NGOs in creating awareness among the masses were brought to a standstill.

With relaxation of the total lockdown, it is being seen that along with other activities, the usage of single-use plastic is also making a comeback.

Today, the market is flooded with single use plastics, which is in total defiance of the government’s order, and the numerous awareness programmes, workshops and seminars which seem to have gone down the drain.

When contacted, KMC administrator, Kovi Meyase said the KMC had issued a notification in the month of September reminding that ‘plastic ban is still in force and that action would be taken against anyone found using single use plastic.’

Though the tangibility of the ban seems bleak at the moment, Meyase said “We are yet to pick up the momentum and we suddenly cannot give up our efforts. We are on the job in a small way.” He added that field staff have been instructed to check the use of plastic in and around the town.

Green Team Kohima, one of the main stakeholders in fight against single use plastics has conducted numerous seminars and awareness programmes on the ill effects of single use plastics. One of its members, Atuno shared with The Morung Express, “It is quite painful to see that people have started to use plastics today.”

“While we are aware that we are so dependent on single use plastics which has make our life so much easier, we, at the same time cannot take any chances in our fight against plastics pollution and its ill effects on our environment and health” Atuno said, sharing her concerns.

As normal life is slowly getting restored, she expressed hope that the district administration will take up this problem and follow it sincerely. She also added “We don’t accuse or condemn anyone. We are all equally responsible in this fight against plastics” and said that the team would soon meet the Deputy Commissioner and apprise him on the issue.

When enquired on how to fight the menace, Atuno admitted “I really don’t know how we are going to fight this.” However, she iterated on attitudinal change and expressed sadness that the awareness programmes didn’t seem to have any impact on the people.

“Attitudinal change is a must and if it doesn’t come from us, I think no matter how much government is trying, if the citizens don’t understand, there’s little anyone of us can do” Atuno stated matter-of-factly.

On the defiance of the government standing order on single use plastic ban, she remarked “it’s all 50-50; government seems to be complacent because the public are complacent and when we see a little enforcement or efforts from government, public hesitate and start pointing fingers rather than going ahead and look for ways on what we all can do together.”

Meanwhile, it was learnt from a reliable source that there are local player (s) in supplying single use plastic in the market, wherein the shopkeepers are reportedly assured that ‘it is okay to use single use plastics and to report (to the distributor (s)) in case of any problem.

“The way it is flooded in the market and distributed by the suppliers, they have stocks and stocks of plastics in their godown, and the government is unable to trace those suppliers” said the source.

The fight against single use plastics is not going to be as simple as it seems, and cannot be fought by a handful of NGOs or government agencies. If the government is ‘genuinely serious’ about mounting plastics and lest it becomes another ‘redundant order’, it is vital to rope in the district administration, police, municipal and civil societies for a joint effort to effectively curb this menace.