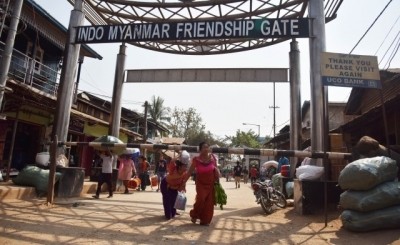 Guwahati, May 20 (IANS) Around 15,500 Myanmar nationals, who have sheltered in Mizoram since the military seized power in the neighbouring country on February 1, has further deepened the distress of the bordering state as several hundred Myanmarese have tested for Covid-19 and one of them died, officials said on Thursday.

Health officials in Aizawl said that one of the many Covid positive Myanmar nationals died at a Covid Care Center in Aizawl on Wednesday.

"At the moment there is no exact data about how many Myanmar refugees were infected by the Covid-19. We are collecting the information. However, several hundred among the Myanmar nationals were infected by the contagious disease," a health official told IANS over phone, refusing to be named.

"The Covid management in Mizoram have turned complicated as huge number of Myanmar nationals tested positive for the coronavirus and they are staying in many places and homes in at least six districts of the state, specially along the border villages," Mizoram's state planning board vice-chairman H. Rammawi told the media.

Around 9,444 positive cases have been detected in Mizoram till Thursday evening, while the state's active caseload stood at 2,073 on Monday.

A large number of Myanmarese, who belong to the Chin community, ethnically similar to the dominant Mizos of Mizoram and the Kuki-Zomi people in Manipur, are also staying at the homes of the local residents.

Mizoram Chief Minister Zoramthanga had earlier urged Prime Minister Narendra Modi to provide asylum, food and shelter to those refugees who have arrived in the state since the military coup in Myanmar on February 1.

Referring to Union Home Ministry's advisories to the Chief Secretaries of the four northeastern states bordering Myanmar and also to the Assam Rifles and Border Security Forces for taking action to prevent illegal influx from Myanmar into India, Zoramthanga said, "This is not acceptable to Mizoram."

A Mizoram government delegations comprising state's comprising Mizoram's Lok Sabha member C.Lalrosanga, Rajya Sabha member K.Vanlalvena, the State Planning Board Vice-Chairman H.Rammawi had already met separately with Vice-President and Rajya Sabha Chairman M.Venkaiah Naidu, Union Minister of State for Home Nityanand Rai, Home Secretary Ajay Kumar Bhalla and others in Delhi and persuade them to impress upon the government not to forcefully push back the Myanmar nationals sheltered in Mizoram.

Local administrations and NGOs in Mizoram have been providing immediate help and shelter to these Myanmarese refugees.

Meanwhile, the MHA had earlier given directions to the chief secretaries of four northeastern states -- Mizoram, Nagaland, Arunachal Pradesh and Manipur -- sharing borders with Myanmar to not entertain Myanmar refugees. It also instructed Assam Rifles to seal the border and prevent entry from the neighbouring country, the statement said.

The MHA letter reiterated that the state governments and UT administrations have no power to grant "refugee" status to any foreigner and India is not a signatory to the UN Refugee Convention of 1951 and its 1967 Protocol.The four northeastern states share a 1,643 km unfenced border with Myanmar.

A one-year state of emergency has been declared in Myanmar where power has been transferred to Senior General Min Aung Hlaing after President U Win Myint and State Counsellor Aung San Suu Kyi were detained by the military on February 1.