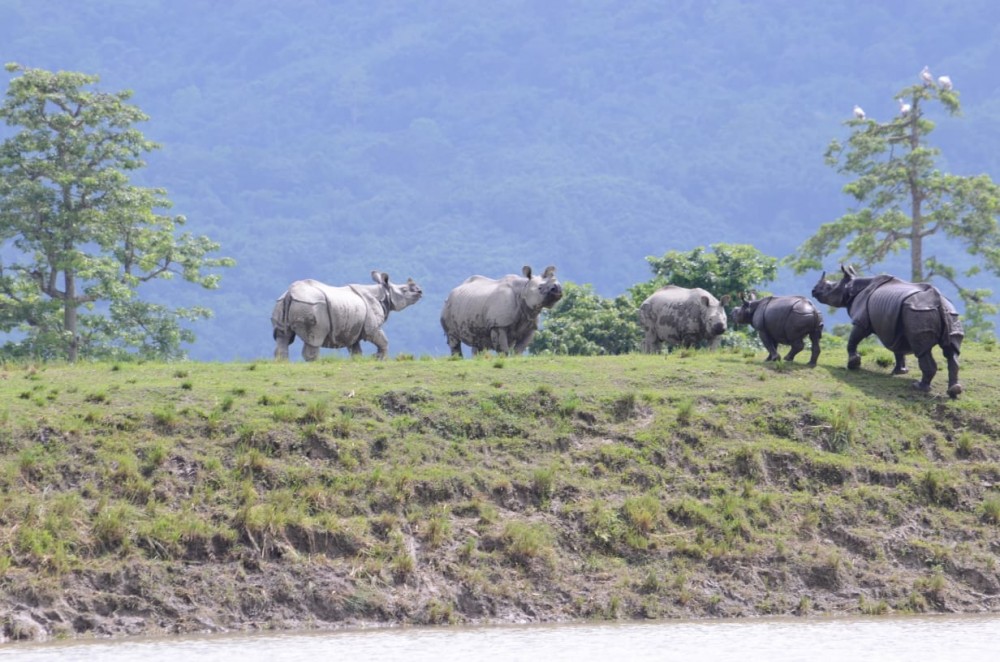 Rhinoceros take shelter on highland in the flooded Kaziranga national park. Assam Chief Minister Sarbananda Sonowal informed in a tweet on July 16 that he has directed the officials to enforce strict measures to ensure safety of the animals, including those which stray out from their natural habitats due to floods. (Photo Courtesy: @sarbanandsonwal / Twitter)
North-East
18th July 2020

Guwahati, Jul 18 (PTI): Flood-related incidents claimed three more lives in Assam, where the deluge has hit 27.64 lakh people in 26 of the 33 districts and destroyed houses, crops, roads and bridges at several places.

Two persons died in Barpeta and one person in South Salmara district, taking the death toll to 105, including 26 in landslides, the Assam State Disaster Management Authority said in its daily flood report.

Ninety animals have died in Kaziranga National Park this monsoon season, it said. Chief Secretary Kumar Sanjay Krishna said there is no problem in flood management as separate teams of government employees have been deployed for flood and COVID-19 currently affecting the state.

Addressing a press conference here, Krishna also said, "There is also no problem regarding funds as enough funds have been released to the districts. Doctors are regularly visiting relief camps to monitor the health of the inmates there."

Dhubri was the worst hit with over 4.69 lakh people affected, followed by Goalpara with 4.49 lakh persons, Morigaon and Barpeta with more than 3.5 lakh people.

SDRF, district administrations and local people have rescued 511 people during the last 24 hours.

At least 2,678 villages are under water, the bulletin said, adding that 1,16,404 hectares of crop areas have been damaged by the deluge across the state.

The ASDMA said authorities have set up 649 relief camps and distribution centres across 21 districts, where 47,465 displaced people are taking shelter currently.

The Brahmaputra is flowing above the danger mark at Neamatighat in Jorhat, Tezpur in Sonitpur district, Goalpara and Dhubri districts, while its tributaries Dhansiri at Numaligarh in Golaghat, Jia Bharali at NT Road Crossing in Sonitpur, Kopili at Dharamtul in Nagaon, Beki at Road Bridge in Barpeta, besides Kushiyara at Karimganj town.