Centre approves setting up of 13 oxygen plants in Northeastern region 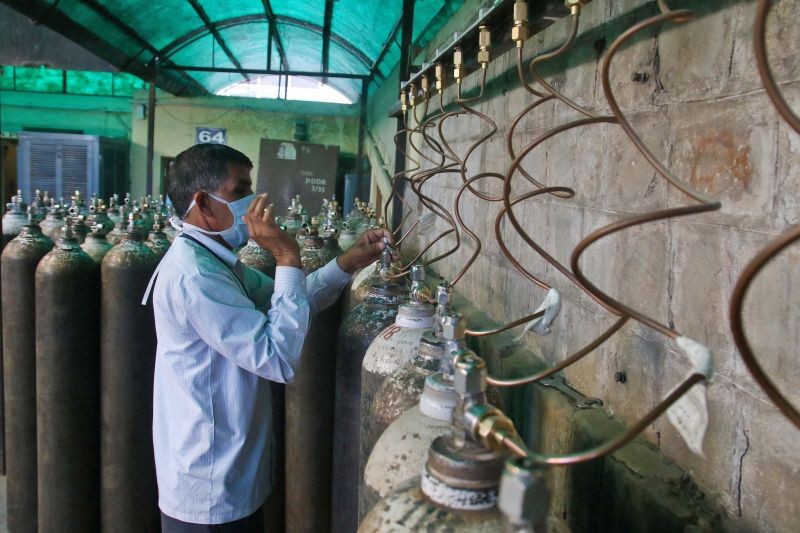 A worker fit medical oxygen cylinders from an Oxygen plant, amid a surge in coronavirus cases, at Sawai Mansingh hospital, in Jaipur April 26. (PTI Photo)

Shillong, April 26 (PTI): The Centre has decided to set up 13 oxygen generation plants in five Northeastern states to boost availability of the life-saving gas amid its shortage in several states of the country when COVID-19 cases are surging, an official said here on Monday.

"Meghalaya, Nagaland and Mizoram will get three oxygen plants each while Arunachal Pradesh and Manipur will get two units each," the official told PTI.

These 13 are among the 551 dedicated Pressure Swing Adsorption (PSA) medical oxygen generation plants to be set up inside public health facilities across the country, he said.

The PM Cares Fund has given in-principle approval for allocation of funds for the installation of the plants.

There is no mention of the three other Northeastern states - Sikkim, Tripura and Assam - in the approved plans, the official said.

The oxygen units will be built in Aizawl, Champhai and Lunglei districts of Mizoram, while in Nagaland, they will be set up in Dimapur, Kohima and Mokokchung districts, he said.

"The objective of the visit was to oversee the functioning of the plant and be prepared to deal with the ongoing crisis," he said.

The unit at Byrnihat produces 2000 cubic meter of oxygen per day.