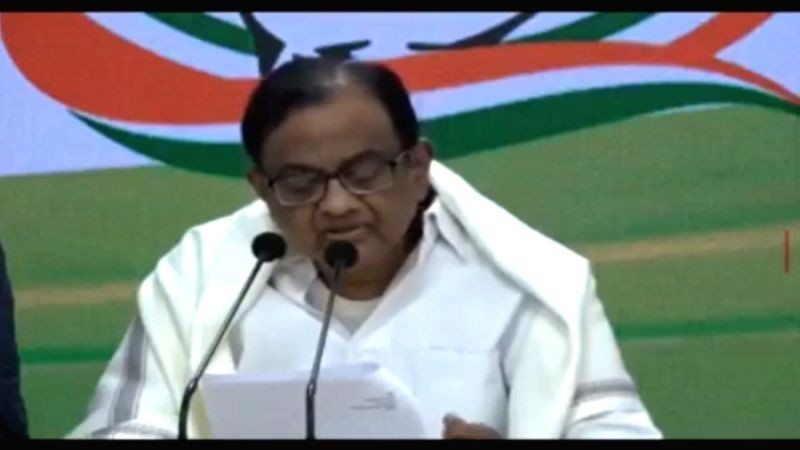 NEW DELHI, JULY 30 (IANS): Former Union Finance Minister P. Chidambaram has hit out at the government over the looming economic crisis in the country and warned that collapse of the telecom and aviation sectors will cost thousands of jobs.

"Millions have lost their jobs or livelihood in the last 12 months. The collapse of two major industries - telecom and aviation - will cost many more thousands of direct and indirect jobs," Chidambaram said in a statement.

The Congress leader asked when will the BJP government "acknowledge" the gravity of the "deepening" economic crisis in the country.

"When will the Prime Minister acknowledge his failure and the failure of his economic managers?" Chidambaram said.

The Congress leader said that the government should realise that one of our major telecom companies is on the verge of collapse and the government has no plan to save the struggling telecom industry.

His attack comes after Bharti Airtel on Wednesday reported a consolidated net loss of Rs 15,933 crore for the April-June quarter, largely on the back of provisioning made for the AGR payment.

"The aviation industry has suffered massive losses and every one of them will go the Air India way unless the government steps in with a rescue plan," said Chidambaram.

He said many aviation companies are in loss and on Wednesday airline major SpiceJet had reported a net loss of Rs 807.1 crore for the fourth quarter of FY20.

Earlier in the day, former Congress president Rahul Gandhi attacked the government and alleged that the Prime Minister has "destroyed" the country due to demonetisation, GST, coronavirus and economic mismanagement and job losses.