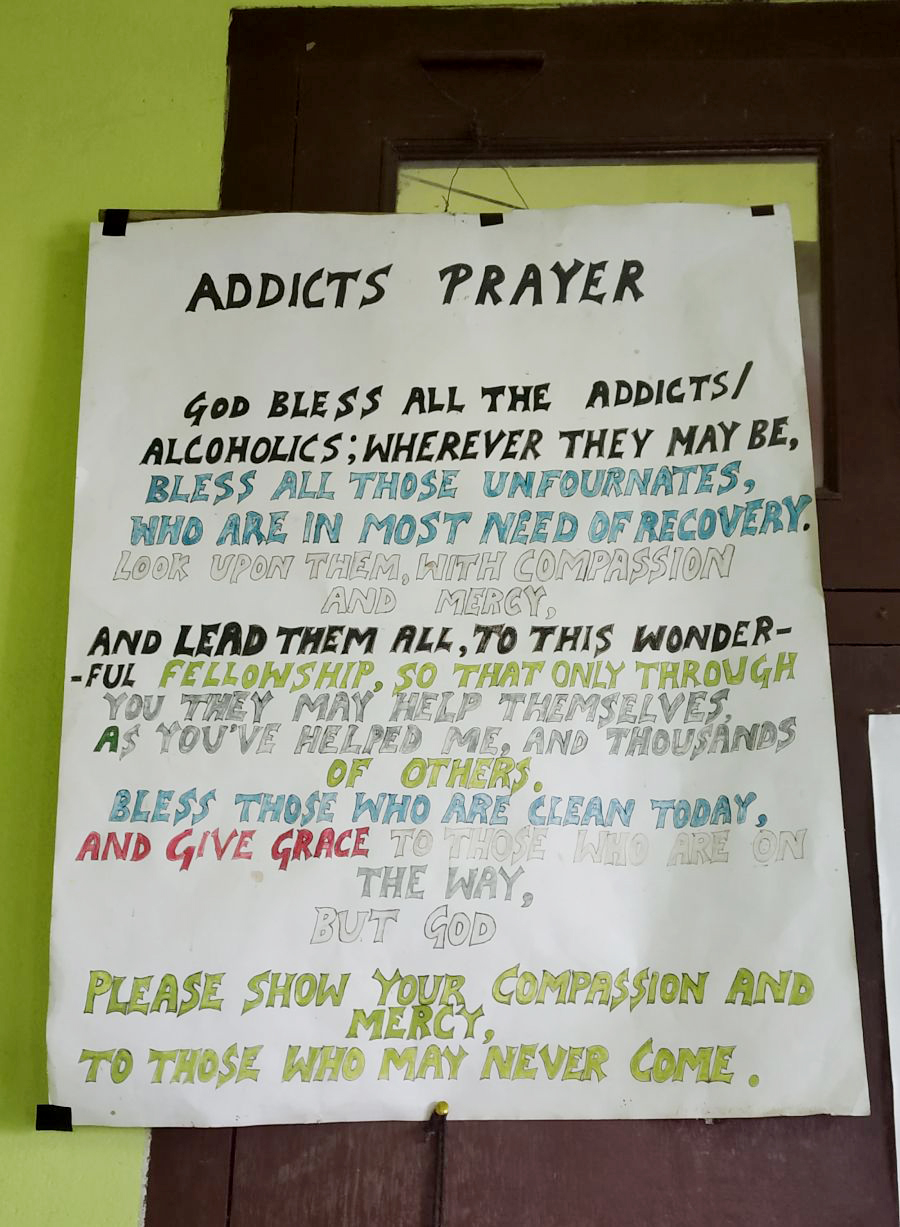 A poster being put at a rehabilitation centre. (Morung Photo)

As the whole country, including the state is in a lockdown due to the COVID-19 pandemic, there are certain groups of people in the society - the alcoholics, drug users and psychotropic  substance users who are going through a challenging time coping with severe ‘withdrawal’ and its consequences.

On the other hand, there are reports coming from around the state that families living with alcohol and substance abusers are having nightmares and sleepless nights, trying to cope with the withdrawal symptoms of their children and spouses.

As per some media reports, Kerala has registered eight cases of suicide by individuals who failed to cope with alcohol withdrawal. Following this, the Kerala government allowed people unable to cope with withdrawal to purchase liquor from government-notified vends with doctor’s prescription.

Similarly, the Meghalaya government too followed the footsteps of Kerala by allowing alcohol to be sold to people with a doctor’s prescription.

Narrating her ordeal, Nino (name changed) whose son is on psychotropic drugs, said they went through frightening times as her son had ‘withdrawal’ during the initial days of the lockdown leading to restlessness, sleeplessness, body-ache and mood swings, and they had to seek the advice of the experts.

Following the advice, she said her son has been able to sleep well, and she is keeping vigil on him. Nino viewed this lockdown as a ‘blessing’ for people like her son, to give up their habits with alcohol and drugs hard to come by in the markets.

“It is the users at the grassroots who are suffering due to non-availability, while the rich and elite can procure from their sources or rather had stocked up in advance" said a man on condition of anonymity.

Director Kripa Foundation, Abou Mere informed that he receives 3-4 calls on a daily basis seeking admission in the rehabilitation centre since the lockdown. Unfortunately, he said, the centre is full at the moment with 34 inmates, and due to the lockdown and social distancing; the centre could not admit new clients.

Nonetheless, he added that this painful experience lasts only for few days, and eventually, it will just fade out on its own, and the body will start coping itself without the drugs and alcohol that they were used to.

Once this period is over, Dr Pienyü said they will start sleeping peacefully, restful and comfortable.

On a lighter note, terming the lockdown as a ‘forceful withdrawal’ he opined that this lockdown may have good side effects on those dependent on alcohol and psychotropic drugs, indirectly.

Another positive thing, he observed about the COVID-19 lockdown was the inaccessibility and soaring prices, leading to reduced consumption, which ultimately is improving the health of the people in this group.

“Probably this is the best kind of prohibition. Prohibition is working now. Lockdown is reinforcing the prohibition act. That way, they are being benefitted” added Dr. Pienyü matter-of-fact.

He also advised that though it will be hard, they have to tide over the crisis with some sacrifices, which eventually will benefit them in the long run. At the same time, he further added that if they can get good counseling support around this time, it can truly benefit them.

Ministry of Social Justice and Empowerment and National Drug Dependence Treatment Centre (NDDTC) AIIMS, New Delhi in an advisory on alcohol withdrawal  during the lockdown stated “a lockdown situation, which entails non-availability of alcohol, maybe a blessing in disguise for some people who may utilize this opportunity to quit drinking altogether.

However, it is also a significant challenge for a certain proportion of people with alcohol dependence, who are at risk of experiencing severe alcohol withdrawal and its consequences.”