Symptomatic cases are steadily increasing in Nagaland even as detection of cases decline. The Integrated Disease Surveillance Programme (IDSP), Health & Family Welfare, in its weekly COVID roundup released on January 9, noted decline in positivity rate or positive cases but added that symptomatic cases among active cases has increased to 24 percent, as of this week, from 1 percent in July, 2020.

Cases detected from flu clinics or people without travel history or contact with a known case continued to remain high at 14 percent.

It also noted a slight increase in the mortality rate, which rose to 0.61 percent this week (January 2-8) from 0.58 percent the previous week. Comparatively, the country’s mortality rate was at 1.45 percent.

Four COVID deaths were reported during the week. The number of deaths, as on January 9, was 84, of which 10 were designated as “not COVID related.”

January, so far, has recorded 4 deaths, while December ended with 11 recorded COVID deaths.

On the whole, the positivity rate for the state remained high at 9.8 percent against the country average of 5.8 percent.
In terms of recovery, Nagaland’s 97 percent fared slightly better than the national 96.3 percent.

Testing
The testing rate made a slight increase to 59.5 tests per thousand population from the previous week’s 59 per thousand.

During the same period, the country average rose to 133.1 tests per thousand population from 129.1.

Bed occupancy
The bed occupancy rate in COVID Hospitals across Nagaland, excluding military facilities, dropped to 3 percent from 4 percent the previous week. As per the IDSP data, only the COVID Hospitals in Dimapur (13 percent), Kohima (3 percent) and Mokokchung (1 percent) had patients admitted.

Dimapur has the highest admissions or 784 patients admitted to the COVID Hospital in the district, as on January 8.

Meanwhile, 10 percent of the beds at the COVID Care Centres in Mokokchung were occupied and in Dimapur, 1 percent. The CCCs in the other districts had 0 percent occupancy. It worked out to 1 percent occupancy rate at the CCCs across Nagaland. 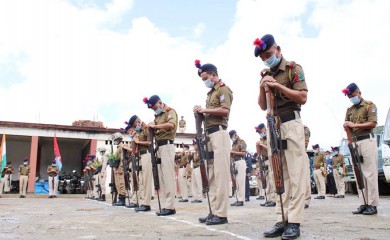