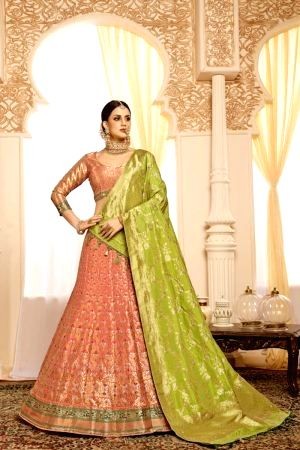 Mumbai, October 27 (IANS): In recent days, people passing by some of the biggest fashion hubs in Mumbai rub their eyes in disbelief at what they behold.

Instead of the familiar eye-catcher multi-hued designer garments hanging in the windows, they witness luscious fresh vegetables, fruits, groceries, farm and dairy products, masalas, et al, beckoning them inside.

Some of the big brand names that have embraced the transformation include Benzers, Roopam, Amarsons in Mumbai and the trend has been picked up by thousands of similar big and small fashion hubs around the country, say industry players.

After encountering a gloomy business scenario with all the major festivals -- starting from Holi (March 9), Gudi Padva, Baisakhi, Ramzan Eid, Ganeshotsav, Navratri, the upcoming Diwali and Christmas, besides the two big marriage seasons (summer-winter 2020) -- virtually gobbled up by the Corona pandemic, many retailers have taken the risk to diversify into the afresh add-ons' to lure more customers.

"Foods and essentials are a normal thing at departmental stores or supermarkets globally... What we are witnessing here now is a welcome sign of change, a new positive trend, and we are watching it very closely," Retailers Association of India (RAI) CEO Kumar Rajagopalan told IANS.

He says that traditionally in India, most stores functioned as unique specialty outlets, but now they are open to diversifying and combining the best of 'designer v/s essential replenishment'.

Federation of Retail Traders Welfare Association (FRTWA) President Viren Shah, who owns the famed seven-storied Roopam Stores in south Mumbai, has dedicated over 50 percent space to replenishments like foodstuffs, groceries, dairy foods, household stuff and kitchenware, while the other half continues to sell designer stuff.

"Presently, nearly one-third of all such outlets in Mumbai have adopted this measure for survival and to compensate the high fixed or running costs in a city like Mumbaia In rest of the country, it has been picked up by around 15-20 per cent of the outlets," Shah told IANS.

However, Rajagopalan concedes that though essentials attract more footfalls, the food segment is difficult to manage due to low margins, low shelf-life and require more care vis-A-vis readymade garments or designer clothes which not only fetch higher profit margins but have a long shelf-life with minimum maintenance issues.

Suburban realtor Nitin Sunderji Shah and a former superstore manager Bhupesh Savla fondly recall the days of the erstwhile supermarkets like Mumbai's "Akbarallys" or "Asiatic Department Stores" and say the current situation is akin to history repeating itself.

"From the 1970s till late 1990s, it was considered a status symbol to shop at places like 'Akbarallys' or 'Asiatic Department Store', for both essentials and designer clothing, though the prices were relatively high, but people walked out with pride, carrying their shopping bags. Then, malls came in the millennium and the shopping experience changed," reminisced Nitin Sunderji Shah.

Rajagopalan believes that given the current challenging times for the entire retail industry with over 1.20 crore big and small outlets in the country, the new trend offers an opportunity for a comeback from the setback.

"For starters, many neighbourhood 'kirana' of 'pansari' stores would be converted to departmental stores in the coming months. There are more than 12 million such stores and coupled with technology plus Goods & Services Tax regime, have the potential to become supermarkets," Rajagopalan pointed out.

Savla, a former manager with a supermarket who is now a store designer, says the secret is "good service, best quality stuff and a no-questions replacement guarantee" that helps such outlets survive in the long run.

"Though modern-day supermarts assure quality and service, many have difficult returns/replacement policies which irk customers, especially the regulars. But unlike the good old days of personalized service, the modern-day customer has to contend with faceless shopping, long checking out queues, deliveries and even returns," Savla said.

Shah says the current trend may be here to stay "for at least two more years" and will help the industry recover some portion of the huge losses they suffered during the pandemic.

"More than 50 percent jobs have been lost many outlets had to literally shut shop the crises hit us all very hard, across sectors. But, with these innovations, we hope to salvage some of the losses, move on beyond Corona and emerge stronger to face the future," said Shah.