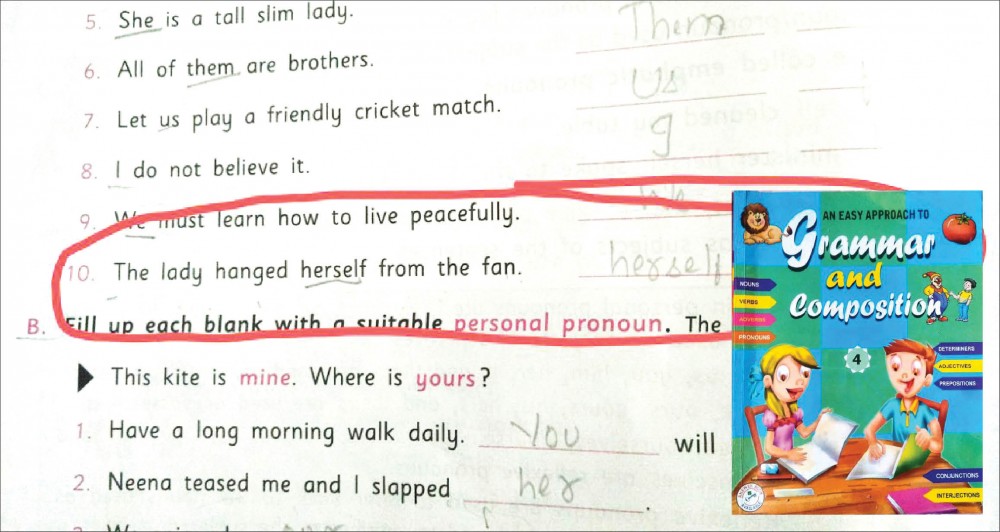 A picture of the disturbing sentence in the class IV texbook (inset) which was posted on Twitter.
Nagaland
6th August 2020

When Chuilei Wangnao heard a Class IV student of a private school in Mon repeatedly saying, “The lady hanged herself from the fan,” she could not believe what she was hearing. The child, who Wangnao has been tutoring for the past several weeks, was trying to memorise the sentence from the English Grammar textbook.

The textbook called “An easy approach to Grammar and Composition” is apparently meant for students of Class IV and the school which is under the Nagaland Board of School Education (NBSE) has been using the text book for the last five years. In the same chapter is another distressing sentence which goes, - “Neena teased me and I slapped her.”

“I was shocked to see what she was studying and the sentence was so disturbing so I asked her to skip it and go on to the next question,” she said.

Wangnao is a college student, pursuing English Literature from St Joseph’s College (Autonomous), Jakhama, but she has been tutoring children in her colony during the COVID-19 lockdown.

Ever since she started giving tuitions to the colony children 2 months ago, she said she has been coming across such sentences in their textbooks.

“But after I discovered this particular sentence, I told myself that Class IV students should not be studying something like this. I mean we are in college but we still don’t get this kind of examples and sentences,” she pointed out.

“Even my own sister studies in the same (private) school as the child I am tutoring,” she said while expressing deep concern that they might grow up thinking this is normal because they studied about it. She also expressed apprehension that students in government schools might be using the same textbook.

Another student of Wangnao, who is studying in a government school, said that their school doesn't officially use the textbook. “They ran out of textbooks so they were using it for some time since the syllabus was a bit similar with their original textbooks.”

‘Will look into the matter: Authorities

Deeply concerned about how it would impact the children as they grow up, she initially thought she would confront the student’s teachers but feeling uncertain about how they would react, she decided to share the issue on social media (Twitter).

This is when she also garnered a lot of support on the issue wherein through some of these contacts, an official from the Department of School Education has also been informed and is said to have responded by saying that the matter will be looked into.

The NBSE has also shared similar views after being contacted. Meanwhile, a teacher of the school affirmed that the textbook ‘was definitely not recommended by the board.’

However, many batches of children in different schools of Nagaland might have already read and studied these ‘disturbing sentences’ in Class IV every passing year. Wangnao expressed surprise that teachers over the years didn’t do anything about this and strongly felt such sentences should not be printed in their textbooks.

When contacted, Nellayappan, Assistant Director of School Education said the department is not aware of the particular textbook being used in the private school while highlighting that private schools use textbooks of different publications although the contents are same. “We don’t have a regulation that all schools should follow a particular publication,” he said.

Stating that there is no ‘monitoring mechanism’ in this regard, he expressed it is also a shortcoming from their side. However with the New Education Policy 2020, he exuded hope that things would change for better. He cited that according to the new policy, there will be common exam for classes 3, 5 and 8. “Things will be sorted out”, he said.

Mention may be made that the State Council of Educational Research and Training (SCERT), Nagaland develops textbooks for the government schools in the state while private schools have the liberty to use textbooks of different publications for up to Class VIII. For classes IX and X, the textbooks are common for both government and private schools as prescribed by the NBSE.