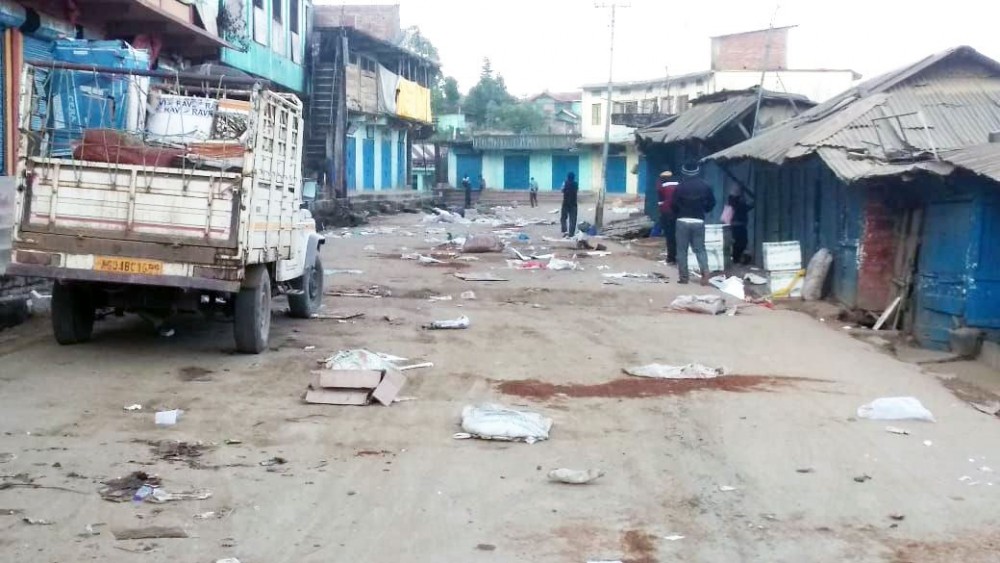 The streets in Longleng wear a deserted look as the ENSF continued its agitation on December 3.
Nagaland
3rd December 2020

KOHIMA, DECEMBER 3 (MExN): The Eastern Naga Students’ Federation (ENSF) has said that it is appalled by the manner in which the cabinet sub-committee even after inviting the federation for a meeting cancelled the same at the last minute.

A press release from the ENSF President, A Sepili Sangtam and General Secretary, Khomo P said that this shows that the State Government does not want to address the demands and instead buy time. It further claimed that the government “wants the federation to carry on with the indefinite agitation as the demand placed by the federation would not serve any purpose to the government.”

The ENSF meanwhile informed that the second round of meeting with Nagaland Public Service Commission (NPSC) as directed by the Chief Minister which was held on December 2 was inconclusive as “they miserably failed to give a written justification and clarification to the issues raised by the federation pertaining to NPSC.” The meeting was convened by the commission along with the Secretary, Commission member, Controller of Exam and Deputy Secretary of the commission at the NPSC office.

The ENSF said that the indefinite democratic agitation will continue in the entire Eastern jurisdiction until the demands are fulfilled.

Meanwhile, day 3 of the ENSF’s 2nd phase agitation passed off peacefully on December 3. It involved locking down of government offices and restriction of movement of government registered vehicles by the six federating units at their respective head quarters.

The federation further directed all six federating units that the 3rd phase of agitations will begin with locking down of the district administration office at all the five districts and also at the sub-division office levels. Complete restriction on government activities and the other restrictions remain the same as per the directives issued, it added.

Cabinet sub-committee appeals
Meanwhile, the Cabinet Sub-Committee constituted to examine the demands and grievances of ENSF regarding the Nagaland Staff Selection Board (NSSB) has asked the Eastern Naga Students’ Federation (ENSF) to withdraw their agitation.

The sub-committee, which held its first meeting on December 3, asked the ENSF to allow the government to decide the issues based on findings in the larger public interest. The meeting today was held under the chairmanship of Deputy Chief Minister, Y Patton. The meeting was attended by all the members of the sub-committee i.e. Ministers P Paiwang Konyak, Neiba Kronu, Advisor Toshi Wungtung, the Chief Secretary and the Commissioner & Secretary, P&AR Department.

The committee discussed and deliberated all the six charters of demands submitted by ENSF in respect to the NSSB. It was decided that the committee would expedite its report and submit its recommendations to the Nagaland State Cabinet latest by December 31.