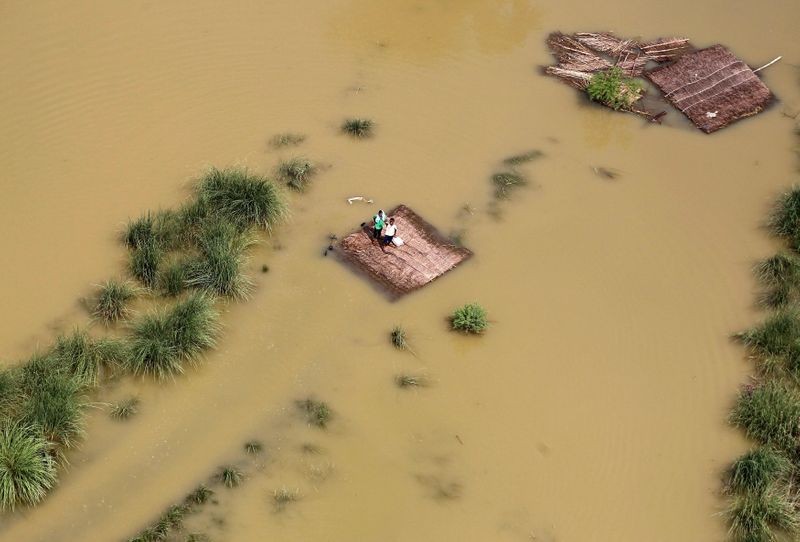 As climate change is eroding age-old certainties, a new cast of characters is searching for answers in the sky

LONDON, July 2 (Reuters) - In the twilight years of past civilisations, astrologers would scour the heavens for signs of impending calamity. In an era where climate change is eroding age-old certainties, a new cast of characters is searching for answers in the sky.

A small but growing network of asset managers, academics, start-up entrepreneurs and campaigners are working to harness an armada of recently deployed satellites to better predict the economic impact of global warming.

While climate scientists caution that the discipline is in its infancy, advocates say the early findings have one over-riding virtue: dynamiting any remaining complacency about the scale of the disruption that lies in store.

"This is the missing piece of the jigsaw," said Michael Hugman, a portfolio manager at London-based asset manager Ninety One, where the fixed-income team runs $44.3 billion of mostly emerging market debt.

"What we can now do is concretely put hard numbers on what climate change means for countries over the next 30 years. This is a whole different way of thinking about risk and return."

While investors have long used satellites to track specific metrics such as activity in shopping mall car parks or iron ore shipments, the new approach -- known as "spatial finance" -- is far more sweeping in scope.

It works like this: analysts acquire satellite imagery and other datasets, filter them using algorithms and use the results to project how climate change could affect anything from a single factory to an entire economy.

Unlike standard risk models largely based on historical data, spatial finance aims to anticipate how rising heat could usher in a radically different future.

Ben Caldecott, director of the Oxford Sustainable Finance Programme, a research unit at the University of Oxford, likens the depth of potential insights to the revolution in biology unlocked by the sequencing of the human genome.

"We've had this massive explosion in Earth observation capabilities that means we can see what's going on on every point of planet Earth, and we can interpret it and use that for financial analysis," said Caldecott, who has launched a spatial finance initiative to widen the discipline's applications.

"What is so transformative is adding another dimension to the information you have as an analyst."

Asset managers specialising in emerging market debt have been among the first to explore the possibilities, recognising, for example, that more intense hurricanes or heatwaves can upend the finances of countries dependent on agricultural exports.

The results can be sobering. Hugman decided to model how climate change might affect a hypothetical debt restructuring plan for Argentina, which is struggling to pay its creditors.

He focused on two of the many possible risks -- the prospect of more ambitious global moves to curb deforestation, which could hit farm exports, and more frequent droughts, using numbers based on spatial techniques. The result: what had looked on paper like a viable plan to manage the country's debt was no longer sustainable.

Environmentalists hope such findings can in turn be used to arm governments in Latin America, Africa and Asia with the data they need to identify the most promising investments to cushion populations from climate impacts.

"What it gives you is a much richer way of engaging with governments," said Susanne Schmitt, nature and spatial finance lead at the World Wildlife Fund, an advocacy group.

Working with Hugman and other asset managers, Schmitt aims to leverage spatial finance to mobilise investment in climate-friendly projects such as preserving mangrove swamps or forests.

Others wonder whether developing ever-more specific levels of analysis might prove a double-edged sword, enabling smart investors to offload potentially doomed assets to climate-naive counterparts rather than help the vulnerable.

"The big question for me is, what happens when particular companies, assets and entire countries are identified as being at risk?" said Kate Mackenzie, a Sydney-based consultant who has advised companies and regulators on climate change.

"Are those assets sold to markets and buyers who have the same visibility of that risk?"

Even before the coronavirus pandemic gave investors a crash course in the fragility of the global economy, concerns were growing over the far bigger dangers posed by the climate crisis.

On climate change, none of the models investors were using captured risks of the "magnitude we have today", warned Luiz Pereira da Silva, BIS deputy general manager, speaking on a podcast recorded when the report was launched.

"We need to use more and more novel approaches, forward-looking scenarios that instead of just trying to replicate the past, extrapolate from the knowledge that we are accumulating with climate scientists," he said.

A stack of research has hammered home the scale of the dangers looming by mid-century if greenhouse gas emissions keep growing. In January, the McKinsey Global Institute pointed out that cities in parts of India and Pakistan could be among the first places in the world to experience heatwaves hot enough to kill a healthy human, under a high emissions scenario.

West Africa may see 70-90 more days per year with dangerous levels of heat than at present, according to World Bank data. And even if emissions start to fall moderately, rising sea-levels are projected to hit land in China, Bangladesh and India that is now home to 171 million people, according to a study by Climate Central.

With investor concerns over climate growing, entrepreneurs have spied an opportunity to refine a torrent of data streaming down from space into products for money managers.

In Britain, new spatial finance start-ups include Oxford Earth Observation and Sust Global. Based in Charlottesville, Virginia, Astraea Inc mines data from some of the 1,500 earth-observing satellites in orbit at any given time.

The company is working with Caldecott's spatial finance initiative to create an open-source database of all the world's cement factories, which could encourage investors to pressure the most polluting operators to clean up their act.

"We give you the tools to be able to train an algorithm to look for specific things and then apply that across whatever geographic scale you want, " said Chief Executive Brendan Richardson.

With investors in emerging markets increasingly engaging in talks with governments about sustainability, some are exploring whether risks identified using spatial finance could give the discussions more teeth.

"We invest our clients' assets for the long term ... where climate change and environmental factors will actually be significant," said Mary-Therese Barton, head of emerging market debt at Pictet Asset Management. "That's where the dialogue becomes really important."

Long before big data and space exploration, in 8th century Baghdad, a star-gazer known as Masha'allah ibn Athari inspired generations of future astrologers with a theory that the cycles of Jupiter and Saturn predicted global upheaval.

While none of the spatial finance start-ups claim prophetic powers, climate scientists advise caution. The climate-related shocks that tend to cause the biggest market gyrations are generally extreme weather events, such as hurricanes, which cannot be predicted with any real degree of precision.

Andy Pitman, a climate scientist at University of New South Wales in Australia, says there is no question that investors need to grapple with climate risk, but worries that some companies might be overselling what they can do.

"It's probably a 10-year moonshot to close this gap between what businesses want to know, and what climate scientists can reliably provide them," Pitman said.