Far from home and facing daily challenges, migrant workers get some respite 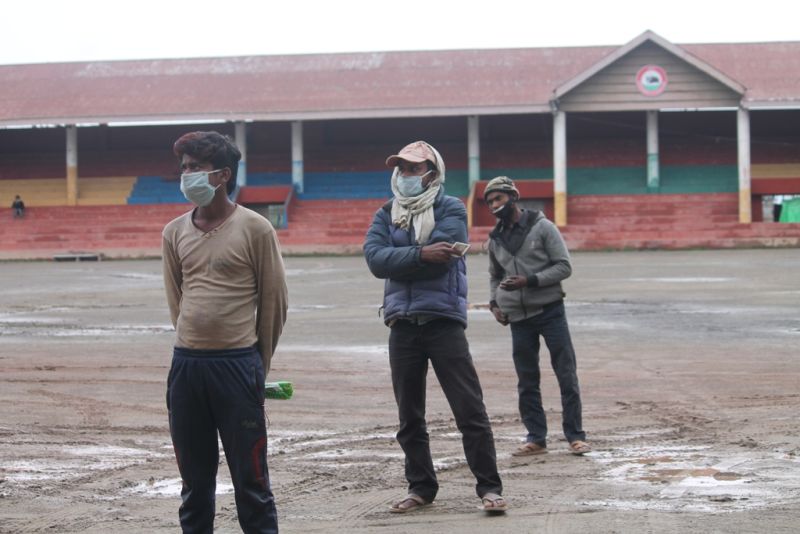 "We have been eating rice and salt for almost a week," says 30 years old Ram Bharoh, who came to collect the free ration along with eight of his friends at Khuochiezie, Kohima.

The free ration provided by the Nagaland Government at Khuochiezie, Kohima local ground is being distributed by the District Administration and District Disaster Management Authority, Kohima. Essential items such as rice, dal, salt and local kholar has been distributed to over 14,000 beneficiaries in Kohima at the relief distribution center.

Under lockdown amid the COVID 19 outbreak, migrant workers and daily wage earners like Bharoh have been reeling under hunger and poverty in the absence of work and daily earnings. Bharoh works at a private construction building whose employer has helped them by providing free accommodation and basic amenities such as rice and water.

"Our employer was kind enough to provide us a free accommodation, and some ration.  But how long can they help us with this lockdown. We are already indebted to them. He told us that the government is providing free ration, so we have come to collect," Bharoh said. Before the lockdown, Bharoh earned Rs. 300 daily, which he would save and send to his family of five in Bihar.

"We didn't know there will be a lockdown, so we sent all our earnings back home. Now we don't have any money to buy food. We can't even afford to buy soap these days. We haven't washed our clothes," remark 32 years old Haridas Swami, as he shows his dirty clothes which he has worn for weeks. Like Bharoh, Swami hails from Bihar and is the sole bread earner with three children and a wife dependent on his earnings.

Being a migrant worker poses serious challenges, as the workers expressed their fear of coming out to even collect the free ration. The fear of being harassed and assaulted often follows these workers working in a place they cannot call home.
"We were scared to come out but our employer encouraged us to get a residential proof from our colony in order to collect the ration," says another.

"Had we been given the chance, we would have left for home. Things would have been easier then," rues 33 years old Umashankar Swami as he waits in line to collect his ration.

Update: The headline has been revised after an ‘advice’ from the Press Information Bureau, Guwahati to “revise the caption of the story” maintaining the headline to be “misleading.”