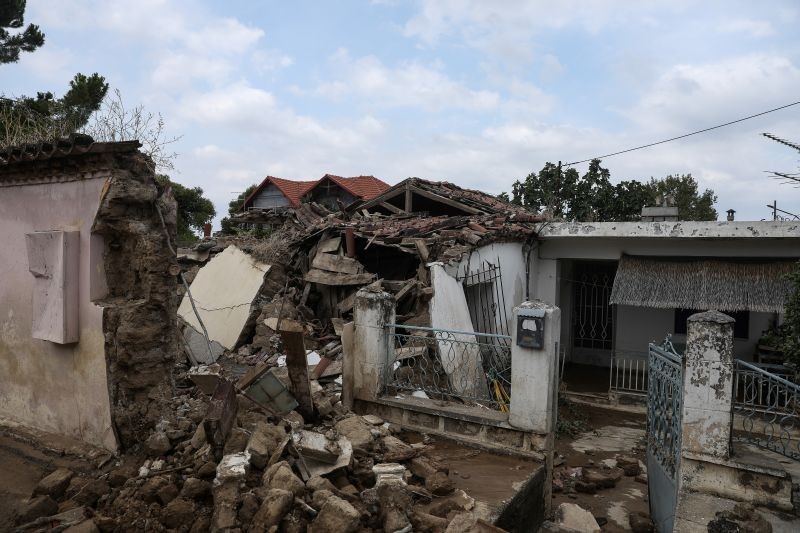 A view of a destroyed house at the village of Bourtzi, following flash floods on the island of Evia, Greece on August 9, 2020. (REUTERS Photo)

ATHENS, August 9 (Reuters): At least five people were killed when torrential rain and thunderstorms caused flash flooding on the Greek island of Evia over the weekend, officials said on Sunday.

Most of the victims, including a baby, were found in or near their homes in Evia, northeast of Athens, fire brigade officials said. Rescuers were still searching for two people who were reported missing.

The fire department received hundreds of calls to pump water from homes and vehicles.

Dozens were evacuated and eight people were rescued by helicopter as roads flooded an area where a river had burst its banks. Transport was widely disrupted.

"Our thoughts are with the people who didn't make it," Deputy Civil Protection Minister Nikos Hardalias, who visited the area, told reporters.

"We are faced with phenomena that we haven't experienced before," he said.

Hardalias said the damage caused by the storm was huge in certain areas of central Evia. Prime Minister Kyriakos Mitsotakis was expected to visit the region on Monday.

Twenty-four people were killed when flash floods hit the town of Mandra west of Athens in November 2017, and seven were killed in a freak storm in northern Greece in July 2019.