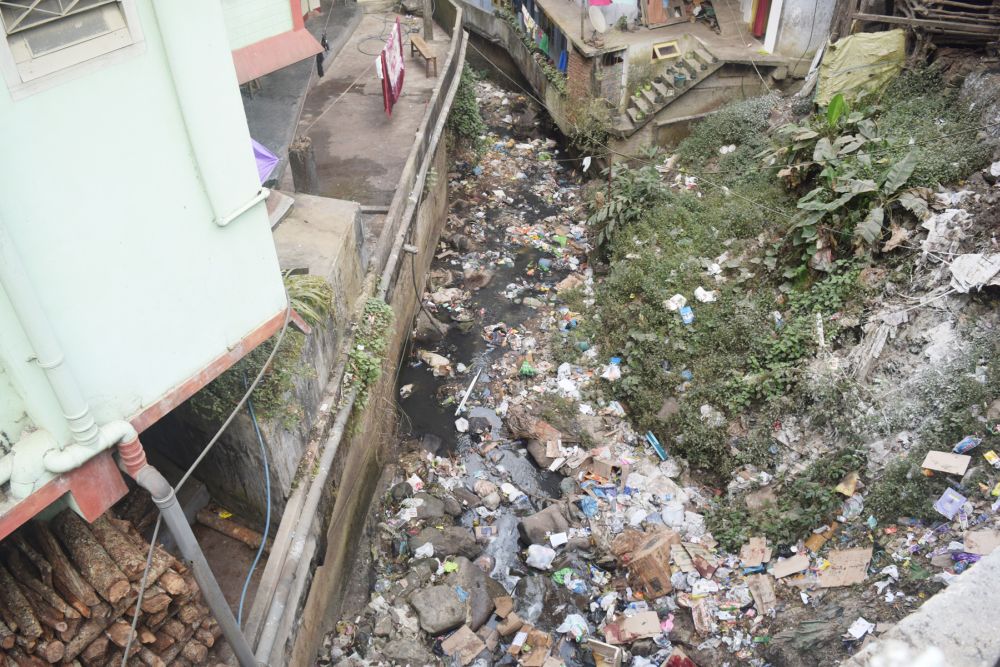 Improper waste disposal: Human and animal waste dumped into the drainages and streams have been found to contaminate ground water in Kohima. (Morung Photo)

Much has been said about scarcity of water and drying up of water sources affecting the lives of the people in various parts of Nagaland. In particular, citizens of Kohima district continue to be severely affected by acute shortage of water mostly during dry season.

Another major concern that has surfaced in recent years is the contamination of ground water that threatens the health of the people.

Analysis of water samples collected from different water sources in Kohima revealed high levels of ammonia and nitrite much above the drinking permissible limit for potable water as per the World Health Organisation (WHO) guidelines.

According to Dr. Nesatalu Hiese, Scientist ‘D’, Nagaland Science & Technology Council (NASTEC), from the water samples analysed under the WTI Project on Water Quality and Analysis, most samples were found with Ammonia, Nitrate, Phosphate and Iron above the permissible limit.

From the 133 water samples analysed under the project, 121 water samples are found to have Ammonia above the permissible limit, 64 with Nitrite, 100 with Phosphate and 23 with Iron.

The contaminations were mostly found from ground water sources- ring wells and deep tube wells. However, not much contamination was found in surface water samples analysed, said Dr. Heise.

The analysis done was of the pre-monsoon and analysis for post-monsoon and physical parameters for heavy metals are yet to be done. She expressed concern that water contamination has become a major threat to the health of the people and therefore needs further study and investigation.

In the absence of proper sewage, she noted that whenever there is a slight rain, people just open their septic tank and flush it out into the drainages, streams and even roads, which them seeps into the soil and contaminate the water sources.

Though Ammonia can be removed by boiling, she said it leads to pre-mature aging (grey hairs) and the deposits of ammonia in the body for long term may affect the kidneys.

Dr Hiese explained that this could be due to the presence of workshops and garages along that stretch of roads wherein acids and battery from the vehicles flows down the river and seeps into the ground.

Arsenic, she said is a slow poison which could lead to severe health issues that can damage the major organs of the body.

Besides the state capital, quality of ground water in the commercial hub Dimapur is also degrading. As per analyses of water samples collected from Dimapur, many have been found to be contaminated with high amount of Lead and heavy metals, Dr Hiese informed.