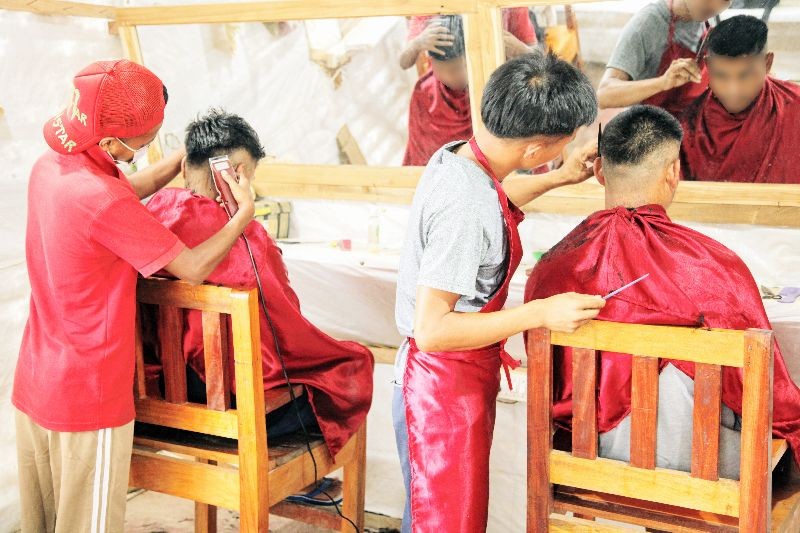 Customers getting a haircut from the barbers at the Donen Edou hair salon in Tuensang village. (Morung Photo)
Morung Exclusive
27th September 2020

With the COVID-19 pandemic and subsequent lockdown putting a stop to many activities, a group of youths in Tuensang village have found a way to maneuver their way through the pandemic.

Donen Edou,a self help group comprising of a group of young, like-minded people came together to create something that was unique to their village ‘in spite of its existence elsewhere’.

It was initiated by Chingmak Chang, Associate Pastor (Youth) of Tuensang village Baptist Church, who also sought help from some of his friends and thus began their journey.

With a mission to provide youths of their village an opportunity to learn the ethics of hard work and also to be self-reliant, a hair salon was opened in the month of November in 2019.

Though started before the onset of the pandemic, the salon is proving to be a point of self reliance for youths in the village.

How it all began
An initial investment of Rs 10,000 from one of the advisors and hair cutting equipment sponsored by another advisor, the salon business took off.  “We found an old storehouse and thankfully the owner was willing to give it to us rent-free. We renovated the house, cleaned and plastered the floor, added mirrors and signboards,” pastor Chingmak narrated.

Eight young boys joined the salon initially, but only three of them are working there at present- Ngaku Somba (28) and Akhang (27) with Sao Chingmak (20) working full time.

Some of them have started their own business and one of them has bought a taxi.

However, it was not easy to convince the youths to join the initiative. It took quite some time and motivation from pastor Chingmak and his team to bolster the young people.

Narrating the journey of the Edou (group), pastor Chingmak said, “In the beginning, they were bit reluctant to join and do such menial jobs. But, with the help of our advisors of our Edou, we encouraged and counseled them about the dignity of labor.”

He also shared that, “Many young people in the village are loitering around with no job or employment and we believed this project could be an escape from it at least for some of them.”

About the salon
20-year-old, Sao Chingmak, having failed twice in his matriculation exam joined as an apprentice in the shop. Almost a year after learning from two other senior barbers he is presently one of the best barbers at the salon.

“Earlier we used to charge 20 rupees per haircut, for older people I do it for free, and if some customers say they don’t have money I still give them a good cut,” Sao shared.

50% of the income from the salon is divided among the barbers, 25% is saved in their joint bank account and for buying things that are needed in the shop.

Compared to the town areas, the salon does not receive many customers, according to Sao.

“We get 5 to 6 customers during weekdays since most of the villagers go to their field but weekends are a rush, we get around 20 people on Sundays,” he added.

With the lockdown eased, the salon has also resumed business, opening from 6:00 am to 10:00 am in the morning and from 4:00 pm to 8:00 pm in the evening on weekdays. On weekends they open for the whole day charging Rs 30 per haircut.

Currently, there are about 7 to 8 barber shops in Tuensang town with around 20 non-local barbers who get as many as 25 to 30 customers in a day.

But for the people of Tuensang village, the Donen Edou’s hair salon and three more barbers shops which have opened recently in the village are their nearest option.

“I’m glad that Tuensang Village Citizens’ Union consented and gave a green signal towards our project and has always supported us in our venture. This is just a small start which I believe will eventually lead to something bigger and substantial in the days to come,” pastor Chingmak said.

Meanwhile, he also shared further plans saying “We have another project in mind for the young girls in the village which is to start a tailor shop. We are planning to send interested individuals for basic tailoring training, buy machines for them, etc but that’s for another day to discuss.

With new found hope and confidence from the venture, Sao Chingmak wants to give another try in the matriculation exam.