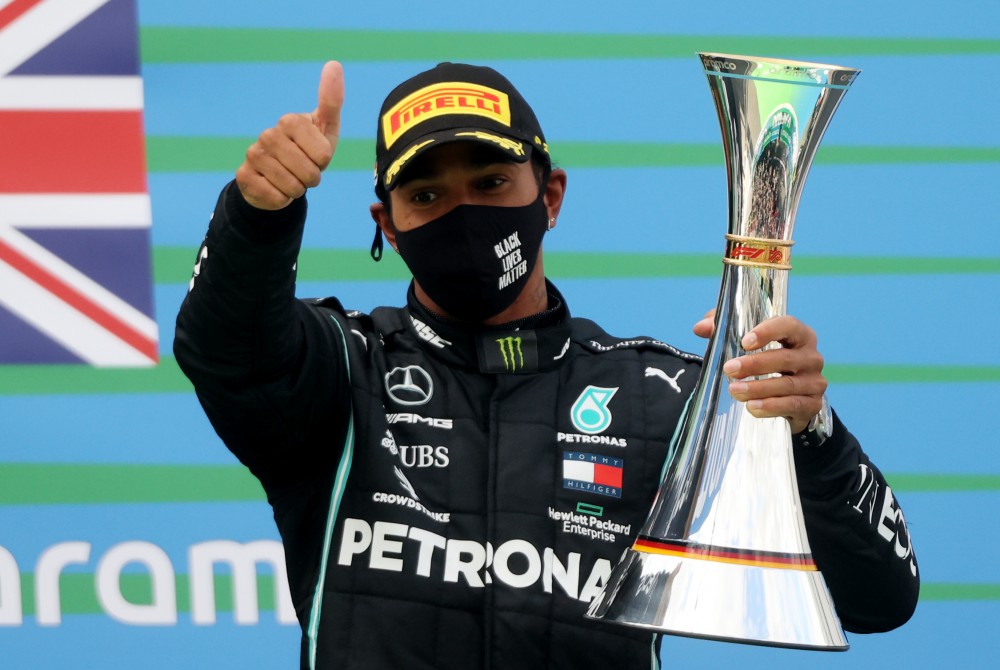 While the Briton triumphed at the Nuerburgring, the German circuit where Ferrari great Schumacher won five times, team mate Valtteri Bottas suffered a huge hit to his title hopes with a first retirement of the season.

Hamilton, celebrating his seventh win of the season, is now 69 points clear of the Finn in the standings with six rounds remaining.

Red Bull's Max Versteppen finished second, and took a bonus point for fastest lap, with Australian Daniel Ricciardo third for Renault in his first podium since 2018 when he was at Red Bull.

Schumacher's son Mick, the Formula Two leader who could be racing against Hamilton next season, presented the Briton with one of his father's red helmets from his second stint in F1 with Mercedes.

"Congratulations and this is on behalf of all of us. A great achievement, really," said Mick, whose father suffered serious head injuries in a 2013 skiing accident and has not been seen in public since.

"Thank you so much, it's such an honour," said Hamilton before stepping up onto the podium at the circuit closest to Schumacher's boyhood home in Kerpen. "I don't even know what to say.

"When you grow up watching someone you generally idolise them, you know, really just in terms of the quality of the driver they are but what they are able to continuously do, year on year and race on race and week on week," added the Briton.

"Seeing his dominance for so long, I don't think anyone and especially me didn't imagine I'd be anywhere near Michael in terms of records. So it's an incredible honour and it's going to take some time to get used to it."

Hamilton said he only realised the significance of what he had done when he came into the pitlane after taking the chequered flag.