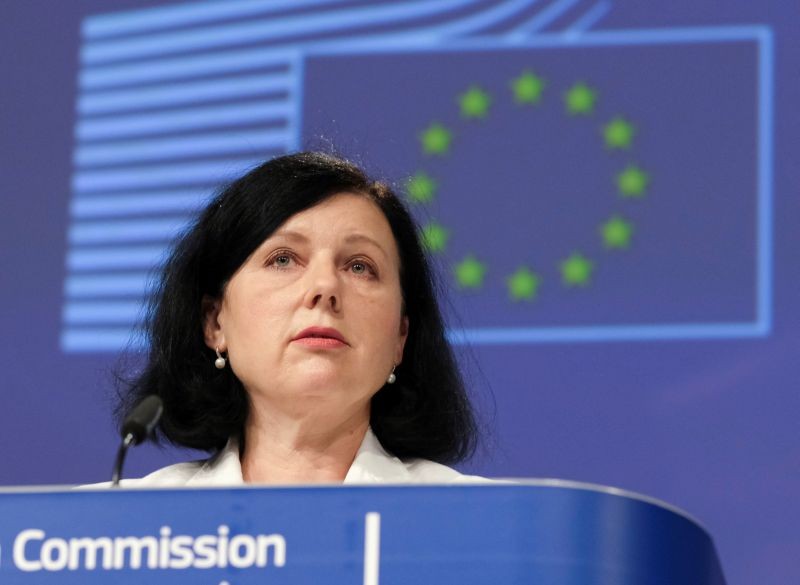 BUDAPEST, September 29 (Reuters) - Hungarian Prime Minister Viktor Orban has called for the resignation of European Commission Vice President Vera Jourova over what he described as her "derogatory public statements" about democracy in Hungary.

Orban, 57, has repeatedly clashed with European Union leaders over his moves to increase state control of the judiciary, media and academia under his vision to transform Hungary into an "illiberal democracy."

Critics in the EU say he defends the rights of nation states and ethnic majorities at the expense of generally accepted rules of civic behaviour. Orban rejected this in an interview with Reuters last week.

"According to the Vice President, in Hungary a 'sick democracy' is being built," Orban wrote in a letter to Commission President Ursula von der Leyen published on Tuesday.

Orban's call for the removal of Jourova, in charge of the Commission's work on values and transparency and upholding the rule of law, comes as Hungary faces a slower-than-expected recovery from the coronavirus pandemic.

"There is hardly any criticism of the government in Hungarian media any more, so a wide majority of Hungarians are possibly no longer in a position to form a free opinion. I fear that people in Hungary could one day discover that their last election was also their last free election."

Orban portrays himself as a defender of Hungary's national pride and sovereignty against foreign encroachment, including attacks from "Brussels bureaucrats".

The Hungarian economy shrank by 13.6% in the second quarter, the worst downturn in central Europe, 2020 inflation is seen at an eight-year-high and the forint is central Europe's worst-performing currency.

Hungary's weakened prospects could represent the biggest threat to Orban's decade-long rule ahead of parliamentary elections in the first half of 2022.

Germany, current president of the European Union, has proposed a scheme that links access to EU money, including its 750 billion euro recovery fund, to respecting the rule of law.

Hungary and Poland are under EU investigation for undermining the independence of the judiciary, media and non-governmental organisations.