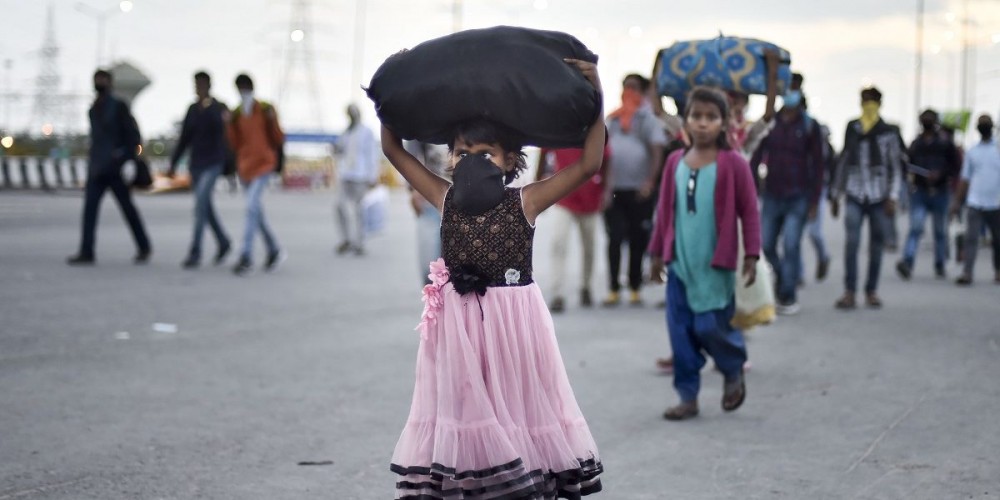 A group of migrant workers walk to their native places amid the nationwide complete lockdown, on the NH24 near Delhi-UP border in New Delhi, March 27, 2020. Photo: PTI
Featured News
19th March 2021

New Delhi, March 19 (IANS): A new Pew Research Center analysis finds that the middle class in India is estimated to have shrunk by 32 million in 2020 as a consequence of the economic downturn, compared with the number it may have reached absent the Covid pandemic.

This accounts for 60 per cent of the global retreat in the number of people in the middle-income tier defined here as people with incomes of $10.01-$20 a day.

Meanwhile, the number of people who are poor in India (with incomes of $2 or less a day) is estimated to have increased by 75 million because of the Covid-19 recession. This, too, accounts for nearly 60 per cent of the global increase in poverty.

Perhaps not surprisingly, media reports in India point to a spike in participation in its rural employment programme - originally intended to combat poverty in agricultural areas - as the many who have lost jobs in the reeling economy seek work. The number now participating is setting record highs in the programme's 14-year history, Pew Research said.

Prior to the pandemic, it was anticipated that 99 million people in India would belong in the global middle class in 2020. A year into the pandemic, this number is estimated to be have been 66 million, cut by a third. Meanwhile, the number of poor in India is projected to have reached 134 million, more than double the 59 million expected prior to the recession. The poverty rate in India likely rose to 9.7 per cent in 2020, up sharply from the January 2020 forecast of 4.3 per cent.

For both India and China, the drop in living standards in 2020 is a sharp departure from recent trends. From 2011 to 2019, the number of poor in India is estimated to have decreased from 340 million to 78 million. The projected rise in poverty in 2020 when comparing pre-pandemic and revised figures - 75 million - claws back several years of progress on this front for India. The retreat of India's middle class in 2020 - by 32 million - also looms large in the context of the addition of 57 million to this income tier from 2011 to 2019.