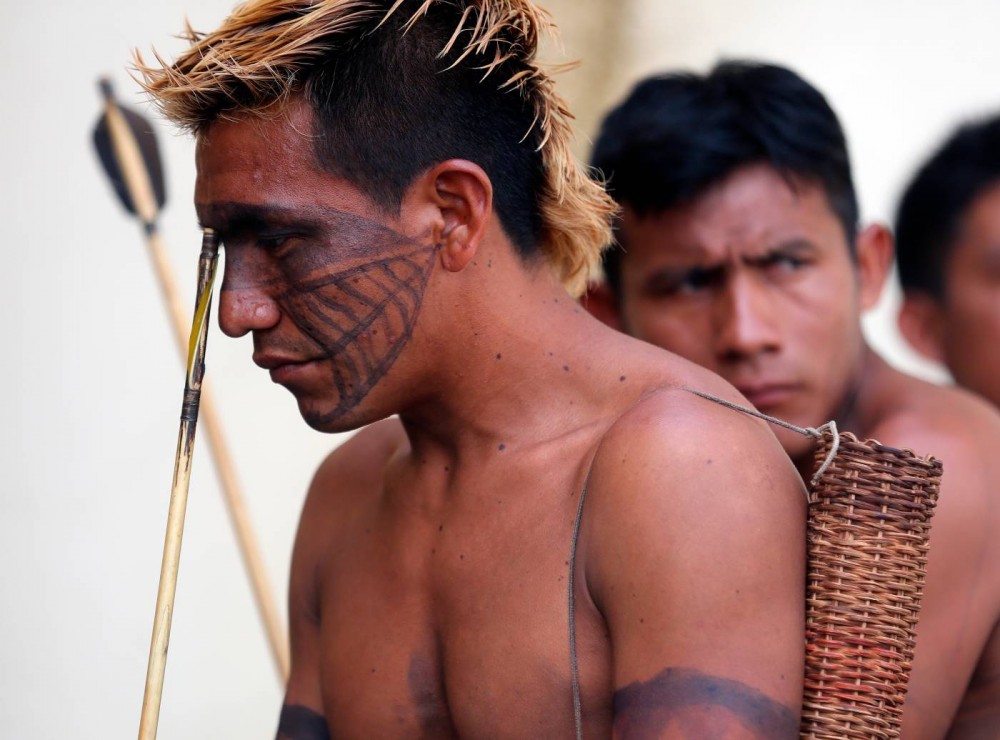 A grain export terminal that draws long lines of truckers each day is raising risks, say Amazon communities who oppose its expansion

BRASILIA, June 11 (Thomson Reuters Foundation) - As the coronavirus pandemic reaches deep into Brazil's Amazon, a ceaseless stream of trucks carry soybeans and construction workers to an expanding port complex in the heart of the forest.

Indigenous activists have opposed the Itaituba port in Pará state for nearly a decade, even before shipments began there in 2014.

But now the pandemic and expansion works are fueling new fears about the port's impact on traditional communities and the biodiversity riches of the Tapajós river.

"There's a flow of workers all the time. Nothing's changed. It's like the virus didn't exist," said Alessandra Munduruku - a leader of the Munduruku people - who lives in Praia do Indio, a village within 10 km (6 miles) of the grain port.

Local indigenous leaders say the complex in Miritituba district is illegal because the companies involved did not comply with an international convention, enshrined in Brazilian law, requiring prior consultation with traditional communities.

"The companies never listen to us," Munduruku, who campaigns on indigenous rights throughout Brazil, said by phone.

Global agroindustry giants Bunge and Cargill are among about a dozen firms that use the Itaituba terminals to load grain grown as far as 1,000 kilometers (600 miles) away in big soybean-producing regions such as Mato Grosso and western Bahia.

Bunge and Cargill told the Thomson Reuters Foundation they operate legally and have met all the licensing requirements set by Semas, Pará's environment secretariat.

'NO INSPECTION, NO CONTROL'

As construction work moves forward on a new port area, just down the river from the current terminals, Munduruku said villagers worry that new roads and construction will encroach further on the forest and their way of life.

Josenaldo Luna de Castro, a community leader from the city of Itaituba, said the traffic of heavy ships on the river since the port complex was established had hurt fish stocks, forcing more than 70% of fishermen to abandon their profession.

Now COVID-19 is exhausting scarce healthcare resources in other Amazon cities, including hard-hit Manaus, and Luna de Castro said Itaituba's residents fear the long lines of truck drivers who arrive in the city each day could bring the virus with them.

"There's no inspection and no control," he said by phone from the city of about 100,000 people.

As Brazil's coronavirus death toll surges, Pará state alone has reported more than 3,800 fatalities, more than 30 of them in Itaituba.

Nationwide, Brazil has seen over 743,000 cases and 38,500 fatalities for the virus, making it one of the countries hardest-hit.

Among Brazil's indigenous people there have been at least 2,600 infections and 247 deaths from COVID-19, according to an indigenous umbrella group, the Articulation of Indigenous Peoples of Brazil.

Ten Munduruku are among the dead, according to Alessandra Munduruku.

The Itaituba port terminals, which each year handle about 8 million tonnes of grain destined for key markets in Europe and Asia, have been allowed to continue operating as normal during Pará's lockdown.

An association of port operators, Amport, said its members "comply with strict security protocols" to stem the spread of the virus but gave no further details.

A little way down river from the terminals used by Cargill and Bunge, the pandemic has not interrupted ongoing construction work on a port area being built by Rio Tapajós Logística (RTL).

Two indigenous villages - Praia do Indio and Praia do Mangue - lie close to the port complex.

But at least 140 villages and 14,000 indigenous people in the area will be affected by the expanded port, according to a consultation drawn up by the Munduruku people.

They say the company, and the others already operating in the area, are in breach of Convention 169 of the International Labor Organization, which requires businesses to consult with indigenous communities before embarking on major projects.

Opponents of Itaituba port say the convention must be respected regardless of whether companies have been granted a license by state authorities.

RTL did not respond to several requests for comment.

Pedro Martins, a lawyer for Terra de Direitos, a human rights organization that operates in the region, said he thought the courts could eventually side with anti-port campaigners and intervene to halt operations at the Itaituba complex.

"In our understanding, the operation of the ports in Itaituba is unconstitutional," Martins said.

Elsewhere in Pará, one of the world's biggest hydroelectric dams - Belo Monte - had its operating license suspended in 2017 for failure to comply with the terms of its environmental licensing, though subsequent court rulings allowed it to restart.

Brazil's National Indian Foundation (FUNAI), a federal indigenous policy body, said that in order to comply with Convention 169 and the Munduruku Consultation Protocol, consultations should be held with Munduruku people on any project that affects their land.

Bunge, which opened an export terminal in Itaituba in 2014, in a joint venture with Brazilian grain group Amaggi, said it had sought input from indigenous leaders during an environmental impact study and public hearing in 2011.

"(The terminal was built) in accordance with all the rules in the legislation," a company spokeswoman said.

Cargill said it had followed the licensing instructions of Semas, saying "the study of the indigenous component was not a requirement for obtaining such licenses".

Since last year, Cargill - in partnership with the Amport association - has been in talks with FUNAI to address the concerns of indigenous communities in the port area.

But while the companies maintain that they did everything asked by the licensing authority, campaigners say revenue-hungry state governments invariably favor the interests of multi-billion-dollar agroindustry above local residents.

"Certainly the state government acts in favor of companies," said Alessandra Munduruku. "All of them obtain approval from the government of Pará without trouble while our lands are never demarcated."

Demarcation aims at guaranteeing an indigenous community's rights to the land.

Semas, Pará's environment secretariat, noted that since the start of the current administration in 2019 it has sought ongoing talks with FUNAI and other bodies to ensure the Munduruku people are consulted on pending licensing processes.

Community leader Luna de Castro, however, said he believed public consultation processes were often skewed against the people they purported to benefit.

"Public hearings here are always just for the record. There is no consultation," he said.