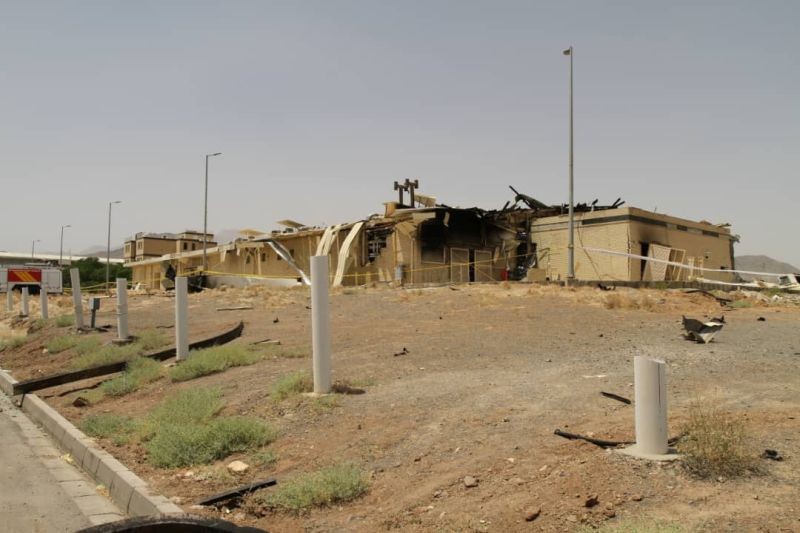 A view of a damage building after a fire broke out at Iran's Natanz Nuclear Facility, in Isfahan, Iran on July 2, 2020. (REUTERS Photo)
World
3rd July 2020

DUBAI, July 3 (Reuters): Iran will retaliate against any country that carries out cyber attacks on its nuclear sites, the head of civilian defence said, after a fire at its Natanz plant which some Iranian officials said may have been caused by cyber sabotage.

The Natanz uranium-enrichment site, much of which is underground, is one of several Iranian facilities monitored by inspectors of the International Atomic Energy Agency (IAEA), the U.N. nuclear watchdog.

Iran's top security body said on Friday that the cause of the "incident" at the nuclear site had been determined, but "due to security considerations" it would be announced at a convenient time.

Iran's Atomic Energy Organisation initially reported an "incident" had occurred early on Thursday at Natanz, located in the desert in the central province of Isfahan.

It later published a photo of a one-storey brick building with its roof and walls partly burned. A door hanging off its hinges suggested that there had been an explosion inside the building.

"Responding to cyber attacks is part of the country's defence might. If it is proven that our country has been targeted by a cyber attack, we will respond," civil defence chief Gholamreza Jalali told state TV late on Thursday.

An article issued on Thursday by state news agency IRNA addressed what it called the possibility of sabotage by enemies such as Israel and the United States, although it stopped short of accusing either directly.

"So far Iran has tried to prevent intensifying crises and the formation of unpredictable conditions and situations," IRNA said. "But the crossing of red lines of the Islamic Republic of Iran by hostile countries, especially the Zionist regime and the U.S., means that strategy...should be revised."

Three Iranian officials who spoke to Reuters on condition of anonymity said they believed the fire was the result of a cyber attack, but did not cite any evidence.

One of the officials said the attack had targeted a centrifuge assembly building, referring to the delicate cylindrical machines that enrich uranium, and said Iran's enemies had carried out similar acts in the past.

Two of the officials said Israel could have been behind the Natanz incident, but offered no evidence.

The Israeli military and Netanyahu's office, which oversees Israel's foreign intelligence service Mossad, did not immediately respond to Reuters queries on Friday.

In 2010, the Stuxnet computer virus, which is widely believed to have been developed by the United States and Israel, was discovered after it was used to attack the Natanz facility.

The IAEA said on Friday the location of the fire did not contain nuclear materials, and that none of its inspectors was present at the time.

"The Agency has been in contact with relevant Iranian authorities to confirm there will be no impact on its safeguards verification activities, which are expected to continue as before," an IAEA statement said, adding that Iran had told it the cause of the fire was not yet known.

Natanz is the centrepiece of Iran's enrichment programme, which Tehran says is only for peaceful purposes. Western intelligence agencies and the IAEA believe it had a coordinated, clandestine nuclear arms programme that it halted in 2003.

Tehran denies ever seeking nuclear weapons, saying its atomic programme is only for peaceful purposes.

Iran curbed its nuclear work in exchange for the removal of most global sanctions under an accord reached with six world powers in 2015, but has reduced compliance with the deal's restrictions since the United States withdrew in 2018.