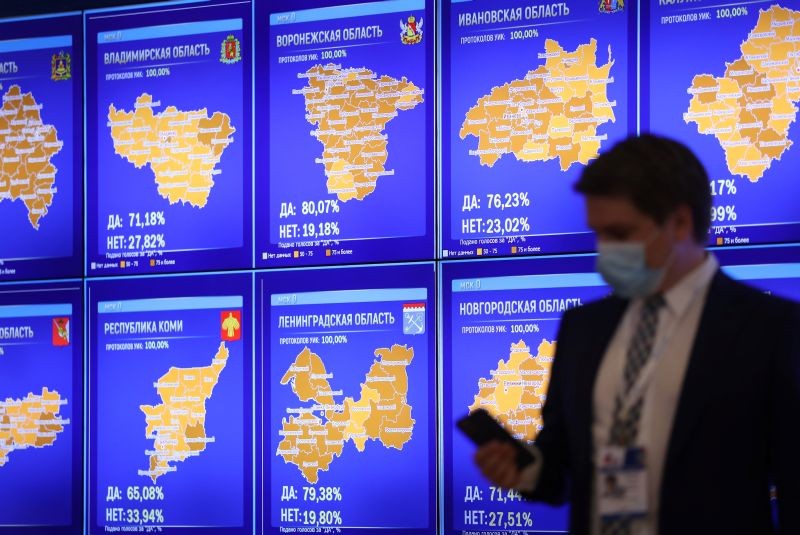 Preliminary results of a nationwide vote on constitutional reforms in Russia's regions are displayed on a screen during a news conference at the Central Election Commission headquarters in Moscow, Russia on July 2. (REUTERS Photo)
World
2nd July 2020

MOSCOW, July 2 (Reuters): The Kremlin said Russians had shown how much they trusted President Vladimir Putin with a nationwide vote that gave him the right to run for two more terms while people wondered on Thursday whether he really would stay on until 2036.

Announcing final results of the week-long vote, officials said nearly 78% of voters had backed changes to the constitution allowing Putin, whose fourth term as president ends in 2024, to run for two more back-to-back six-year terms.

That means that the 67-year-old former KGB officer, who has ruled Russia for over two decades as either president or prime minister, could be in power until he is 83.

An independent monitoring group said the vote was deeply flawed but Dmitry Peskov, Putin's spokesman, said the emphatic nature of the result was a measure of how deeply Russians trusted Putin to run the country.

"It's definitely considered a triumph. What took place was in effect a de facto triumphant referendum on trust in Putin," said Peskov.

Putin thanked voters for their support and trust.

"We need stability and time to strengthen the country," he said.

Golos, a non-governmental organisation that monitors elections, said it had recorded numerous irregularities during the vote, including ballot stuffing and widespread cases of employers forcing staff to cast a ballot.

Already the longest-serving leader in modern Russian history since Josef Stalin, Putin has said he has yet to decide on his political future, but wanted officials to avoid getting distracted by the question of who one day might succeed him.

Public opinion on his intentions was divided on Thursday.

Some people said they were sure he would try to stay in the Kremlin for as long as he could while others predicted he would step down in 2024 but thought he wanted to keep his options open so as not to become a lame duck before then.

“He might still surprise us all," said Abdulmadid Luluev, 51, head of a national environmental organisation for Chechnya in the southern Caucasus region, adding that Putin might refuse to run, depending on how the situation unfolds.

Evgeniy Somov, member of a patriotic organisation in the central Russian republic of Udmurtia, said Putin would not necessarily stay in power until 2036, describing the vote as a "safety net" in case no one emerges who could replace him.

"Running such a country is very difficult and apparently there is no worthy successor yet, or they are just not ready,” he said.

Others said they had no doubts at all that Putin would be staying in the Kremlin for many years to come.

“It is clear to everyone that Putin will run again until 2036. It was a scam as always," said Vyacheslav, a 61-year-old pensioner in the town of Belgorod.

Putin's approval rating stood at 60% last month, still high but hovering around just above a two-decade low after slipping in April amid the coronavirus crisis and related economic pain, a poll by the Levada Center showed.

Opposition activists have called the vote illegitimate and said it was designed to legalise a Putin presidency-for-life.

Moscow resident Ksenia was one of several people who told Reuters she did not believe official figures about the vote's outcome.

"I think none of my friends took part in the vote, I think it is all a fake (the result). No one voted."

Others were more upbeat.

"My attitude to the vote is very positive," said Yevgeny, a Moscow resident who said he had voted in favour of changing the constitution.

Only one of Russia's 85 regions, the remote Nenets region, was recorded as having voted against the constitutional changes amid discontent there over a plan to merge it with another federal region.