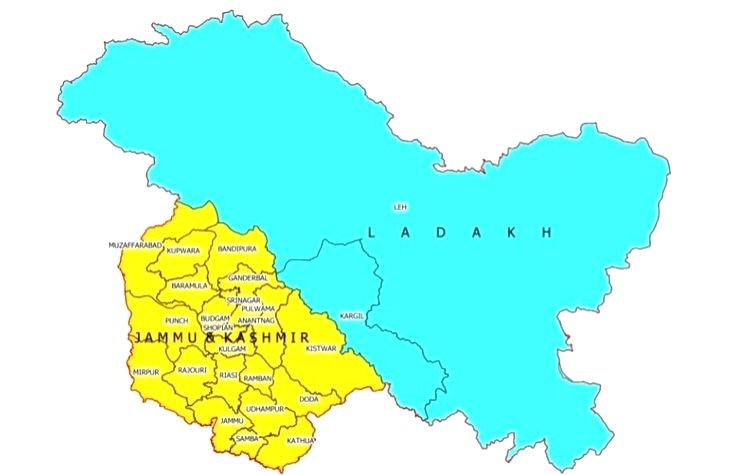 New Delhi, September 27 (IANS): A visiting delegation of veteran Ladakhi leaders has agreed to withdraw the call for a boycott of Ladakh Autonomous Hill Development Council (LAHDC) elections scheduled on October 16 after a meeting with Union Home Minister Amit Shah. The delegation has also promised its wholesome support to the smooth conduct of these elections. The delegation was assured that all issues related to Ladakhi language, demography, ethnicity, land and jobs will be considered positively and taken care of, the Ministry of Home Affairs (MHA) official said.

"A dialogue between a larger Ladakhi delegation comprising of representatives from Leh and Kargil districts under the aegis of 'Peoples Movement for Constitutional Safeguard under VIth Schedule' and the Home Ministry will commence after 15 days of the culmination of LAHDC elections," the official added. "Any decision after the dialogue will be taken in consultation with the representatives from Leh and Kargil." Senior Ladakhi leaders Thiksay Rinpoche (former Rajya Sabha MP), Thupstan Chhewang (former Lok Sabha MP) and Chhering Dorje (former Minister of Jammu and Kashmir), on behalf of the people of Ladakh, met Shah on Saturday at his residence here. Minister of State for Home G Kishan Reddy and Minister of State for Youth Affairs and Sports Kiren Rijiju were also present.

The Home Minister assured the delegation that the central government is committed to empower the LAHDC of Leh and Kargil and safeguard interests of the people of the UT of Ladakh. "It will explore all avenues towards this objective."
Another official said that the central government is open to discuss protection available under the 6th Schedule of the Constitution of India while looking into issues related to Ladakhi people.

In an unprecedented move, Ladakh earlier came together and announced to boycott the LAHDC elections in order to safeguard the region's demography, environment and diversity.

Under the apex body 'People's Movement for Sixth Schedule for Ladakh', it was decided to boycott the LAHDC elections "till such time the constitutional safeguard under Sixth Schedule on the lines of Bodo Territorial Council is not extended to UT Ladakh and its people, a release signed by leaders cutting across party lines had announced.

The Sixth Schedule of the Constitution (Article 244 (2) and 275 (1)) protects tribal populations and provides considerable autonomy to vulnerable communities through the creation of Autonomous Development Councils (ADCs).

Parts of Assam, Tripura, Meghalaya and Mizoram are covered by it.

The move was significant as religious bodies from the Christian, Muslim and Buddhist communities, including the all-powerful Ladakh Buddhist Association, had put their weight behind the protest.

All political parties, including the Bharatiya Janata Party, had come together on this specific demand.

In August last year, the Union government abrogated Articles 370 and 35A of the Constitution and bifurcated the state of Jammu and Kashmir to made Ladakh a Union Territory.

While Ladakhis were happy, they were apprehensive about their future for two reasons. First, the UT status came without a legislature, which effectively rendered the democratically-elected LAHDC toothless to take crucial decisions concerning the region.

With 97 per cent of the region marked as tribal, there were fears that without land or employment guarantees, Ladakhis stood the risk of getting reduced to a minority.

Second, after the announcement of the Citizenship (Amendment) Act by the Union government, the religiously diverse people were apprehensive about the communal divides that it might create.

But they decided to wait out the situation to see what the government would do. However, even as India faces the COVID-19 pandemic and tension with China in eastern Ladakh, the LAHDC elections were not postponed. The Union government decided to push through with the elections regardless of the will of the people.