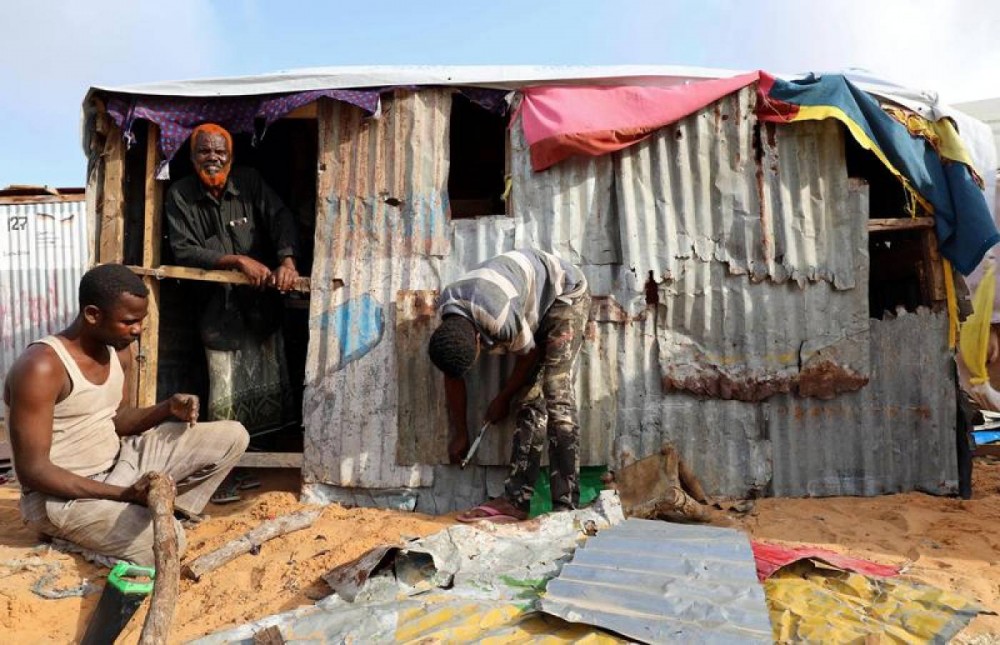 A man stands inside his makeshift shelter at a camp for the internally displaced people outside Mogadishu, Somalia August 28, 2018 REUTERS/Feisal Omar
Featured News
2nd July 2020

Poor communities in Somalia, Kenya and Ethiopia have been left homeless and exposed in the midst of the pandemic, charity says

NAIROBI, July 2 (Thomson Reuters Foundation) - More than 40,000 people across East Africa have been forcibly evicted from their homes since March, putting them at risk of contracting the new coronavirus, said charities on Wednesday, calling for a moratorium on all evictions during the pandemic.

The Norwegian Refugee Council (NRC) found that communities already displaced by violence, droughts and floods in Somalia were worst hit, while in Kenya and Ethiopia, people living in informal settlements had also seen their homes demolished.

"Evicted people do not have a financial safety net. Many have already lost their jobs due to the pandemic and find themselves homeless, hungry and at risk of ill-health at a time when we should be working together to protect all populations."

Government officials in Kenya, Somalia and Ethiopia were not immediately available for comment.

The COVID-19 virus has multiplied more slowly in Africa than in Asia or Europe, but all 54 nations are now infected, with some 400,000 cases and 10,000 deaths, data from the Africa Centres for Disease Control and Prevention shows.

East Africa has recorded more than 36,000 cases, although health experts say the actual number may be much higher as many nations do not have strong diagnostic or widespread testing capabilities.

The NRC found that the majority of evictions were in Somalia, which has been mired in conflict for almost three decades, and where forced evictions of displaced people living in informal camps on private land are common.

More than 34,700 people have been evicted by landowners from their homes in cities such as Mogadishu, Baidoa and Hargeisa since the pandemic was declared in March, it said.

While in Kenya, about 7,000 people - including many single mothers and children - had their homes bulldozed in May when authorities ignored a court order and demolished hundreds of homes in Nairobi's Kariobangi and Ruai areas.

City authorities said the homes were on public land, but some evicted residents said they bought the land legally.

In neighbouring Ethiopia, about 1,000 people were left homeless in April after municipal authorities in Addis Ababa demolished dozens of homes that they said were illegally constructed on land with contested ownership.

Local activists in Kenya said most of those evicted were poor daily wage earners such as manual labourers, cleaners and market sellers - who were already suffering due to a loss of income because of the pandemic.

Ruth Mumbi, coordinator of the Kenya's Grassroots Women Initiative Network, called on authorities across the region to follow the example set by Uganda and Somalia's Baidoa district and ban evictions during the pandemic.

"The evictions (in Nairobi) happened in May and even now there are still some families who have not found accommodation and are staying with other families in cramped spaces - which is not going to help to contain the virus," she said.

"We're calling for a moratorium on all evictions during the pandemic. The government has double standards by saying they want to contain the virus, but then are forcing people out on the streets where they are likely to be infected."