As a young Naga scientist to first cultivate and produce exotic Shiitake in Nagaland in October 2019, Dr Sosang Longkumer has two specific aims - to increase the number of mushroomprenurs in the future and make Nagaland the market for exotic and organic mushrooms.

Dr Sosang, who also actively engaged in training farmers and entrepreneurs in mushroom and Shiitake cultivation since then, shares some farming why and how Nagaland can become the market for exotic mushrooms in the future. 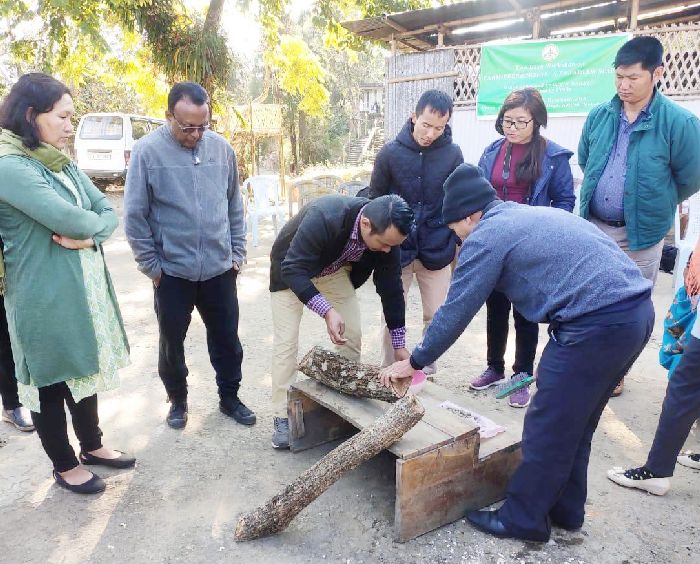 Natural hotspot
According to Dr Sosang, Nagaland can be a hotspot for Shiitake as the state is best suited for its cultivation among all the Northeastern states.

“This is because our forest is dominated by hard wood forest especially Oak, Chestnut and Alder woods, which are the best woods for growing Shiitake,” he reasons, adding: “Naga-inhabited districts of Manipur are also good.”

He also shares that log-based Shiitake cultivation is very viable.

To our advantage, he says, in Nagaland forest resources belong to us due to land ownership and accordingly can be used to generate income by adapting log-based Shiitake cultivation.

“But we have to be wise by cutting only the branches and not the entire tree,” he adds.

Observing that the rest of the states can be our market for Shiitake, Dr Sosang bats for “focusing on the crops like Shiitake which we have potential to produce more.”

“We have also tied up with the Department of Forests and Environment, Nagaland under the Japan International Cooperation Agency (JICA) project for mushroom farming as a pilot project in Noksen village in Tuensang district, Touphema in Kohima District, and Mopungchuket in Mokokchung district,” he informs.

Additionally, he has also tied up with NSRLM and activated SHGs in Mokokchung, Wokha and Kohima districts, and works closely with the Department of Horticulture, GoN beneficiaries in cultivation and guiding mushroom farmers.

To the farmers in Nagaland, Dr Sosang advises to stock up required materials ahead of time for sustainable farming. For Oyster mushroom cultivation, he informs that paddy straw is one of the main substrates which are available only seasonally.

“Do not let your farming be seasonal just because you fail to stock up raw materials,” he says.

“In Assam, the farmers stock up the straw to grow mushrooms throughout the year and supply the produce to Dimapur market. They supply 300 kg of Oyster mushrooms daily to Dimapur market worth Rs 60000. That is something our farmers should also emulate,” he states.

Likewise for Shiitake mushroom cultivation, the season to cut the log (tree branches only) is from October till March followed by inoculation of spawn.

“It is advised to do the right thing at the right time for a better outcome. Consistency is the key. It is imperative to put all focus on the quality with consistency in the production. Also, take one step at a time and do not rush because every stage is important to sustain successfully,” he says with the hope that farmers who grow mushrooms can become an asset to the economy of Nagaland.

This is the conclusion of a two-part series.