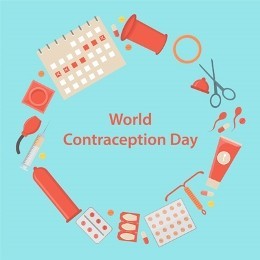 The fertility rate during the NFHS third series 2005-06 stood at 3.7% which shows a decline in the fourth series survey.

In Nagaland, contraceptive use is higher in urban areas (31%) than in rural areas (24%). Contraceptive prevalence increases somewhat with increasing schooling. On the other hand, the report found that women in Nagaland are more likely to use contraception if they already have a son, according to the report.

Among women with two children, 33% with at least one son use a method of family planning, compared to 25% of women with two daughters and no sons. The most common modern spacing methods used by currently married women in Nagaland are the IUD or PPIUD (7%) and the pill (4%). In general, urban women and older women (25 years and above) are more likely than other women to use spacing methods.

World Contraception Day is observed on September 26 every year to improve awareness of all contraceptive methods available and enable young people to make informed choices on their sexual and reproductive health.

Late marriages and infertility rate
Attributing late marriages as a major contributing factor to high rise of infertility, health experts say this has become the most common issue among married couples of late.

Speaking to The Morung Express, Dr Imotemsu, an Obstetrician and Gynaecologist explained that best reproductive years of a woman starts in her 20s till her 30s, after which fertility gradually declines after 35 years.

He stated that couples opting to start families late is another key factor to the rise in infertility rate.

“By the time when a woman reaches 34-35 years of age and the couple try to start a family complications start as the fertility function becomes quite low,” said Dr Imotemsu, adding that this has become common among his patients.

Dr Kanili Jimo, another Obstetrician and Gynaecologist from the Christian Institute of Health Sciences & Research (CIHSR), Dimapur observed that as compared to others states in the country, Naga women usually start their family later, after 30 years of age.

“Perhaps it is because of education that women have become more ambitious and in search of their dreams to be independent,” viewed Dr Jimo. She further pointed out that most couples now, even after marrying, choose to wait and establish themselves first before having children.

“Getting pregnant needs time and it cannot just happen in one time,” stated Dr Jimo, while adding that many women also lack awareness on fertility knowledge.

She recommended that women should have physical exercise at least five times a week incorporating healthy food habits by switching from easily available processed foods to locally available foods.

“For a woman to be fertile, good health is an important factor, if a woman puts on unnecessary weight, it creates hormonal imbalance in the body,” said Dr Jimo.

When enquired on what she would recommend to prevent fertility complications among women, Dr Jimo said “of course I cannot tell our women to get married early, which is impossible but there is a need to balance between work and family.” She also suggested that if a couple has plans to have a child, they should keep in mind the biological factor while planning their family.