There is no community transmission, health officials reassert

With the surge in COVID- cases in Nagaland, the State's Department of Health and Family Welfare (DoHFW) Department today appealed its citizens for a collective social responsibility in preventing the transmission.

Addressing a press conference 19on October 28 at its Directorate, the department officials shared several concerns with regard to the COVID-19 cases.

Positive cases have been increasing following Unlock 4, mainly due to the complacency and lackadaisical attitude of the citizens, they said.

The number of positive cases was stable till August. However, towards September’s end and beginning of October, there has been a spike in total as well as symptomatic cases, he said, adding that mortality rate also increased during this period.

"If we look at our data towards the end of September and start of October, you will observe that more and more traced contacts cases are becoming positive and more symptomatic cases are being reported. We are trying to address this issue. During October, the number of mortality has increased," he said

Complacency has set in with many citizens not wearing masks and maintaining social distance, Dr Suokhrie maintained, attributing the same for the spike of 10-15 percent positive cases in October itself. 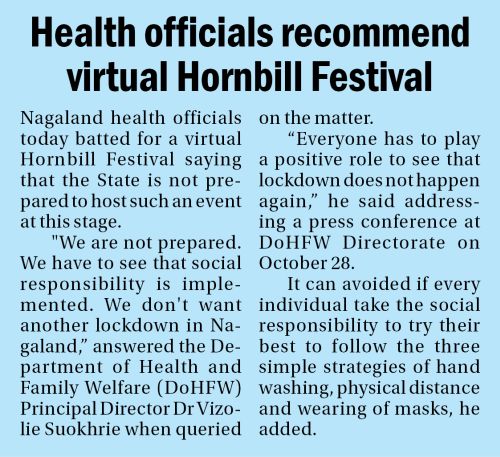 "Another observation is that people are reporting to the health units very late. When they come only at the later stage, there is more morbidity and mortality rate,” he informed. “Early testing and diagnostics is the best in order to avoid fatality and morbidity. If we are able to start the treatment on time, many complications can be avoided,” he underscored.

“We know that we don't have vaccines so the best way is prevention through wearing masks, hand washing and maintaining social distance,” he added.

However, the department reasserted that there is no community transmission, even though there is community spread and asked the public not to be confused with the two terms.

The issue of stigmatization and discrimination is still prevalent, Dr Suokhrie observed with concern.

Further with the onset of the winter season and flu season, the health officials warned that the flu along with COVID-19 infection could lead to more serious complications.  Another big concern is the festive season.

"Follow the SOPs, keep yourself safe, because prevention is the biggest weapon we have against COVID 19," Dr Suokhrie urged.

Meanwhile, while the recovery rate is high, Dr Kevichüsa Medikhru, NHM Director also expressed concern over the complacency of citizens as well as recovered patients.

"People who have been tested positive and recovered do not mean that they are immune. Our people have become complacent at the same time our health workers have become fatigued. They are tired now. Unless we are very careful, our State will have a serious crisis," he warned.

During the press conference, Dr Nyan Kikon, Nodal Officer, IDSP noted there is a 'gradual shift of positive cases from the young people to the old and more vulnerable group of people' in Nagaland.

A major issue behind the shift in the epidemiology of COVID-19 is the starting of Unlock 4.0 which not only witnessed an increase trend of positivity rates but also the 'complacent and lackadaisical attitude of the citizens' especially among the younger generation,’ he said.

Consequently, there has been an increase in social gatherings in urban areas with "young people going out for parties, lounges in the night where all basic standard operating protocols are not followed at all,” he dsaid.

"As the future of the society, young people must take upon the responsibility to be the main champions to prevent the transmission of COVID 19," Dr Kikon pointed out.

Meanwhile Dr Kikameren Longkumer, Deputy Director of H&FW stressed on the three simple low cost strategy to prevent the infection of COVID-19:  hand washing, physical distance and wearing of masks. "It is a collective social responsibility. It works effectively if every citizen works collectively. We are all tired of the pandemic and we all aspire for our normal lives. But when we don't take responsibility to check the transmission, and these three practices cannot be implemented how can we go back to normalcy," he noted, adding that wearing masks helps reduce transmission by 85 percent.