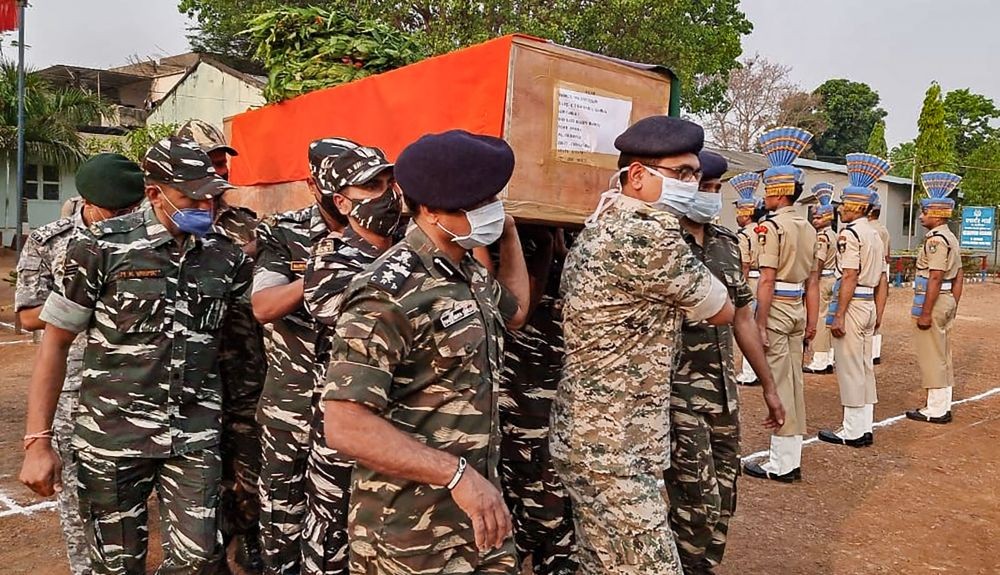 Bijapur: CRPF personnel carry the coffin of a paramilitary soldier who lost his life in an encounter with Maoists, in Bijapur district of Chhattisgarh, Sunday, April 04, 2021. (PTI Photo)
India
4th April 2021

New Delhi, April 4 (PTI) Police recovered bullet-riddled bodies of 20 jawans in the jungles of Chattisgarh Sunday, raising to 22 the number of security personnel killed in a fierce gunbattle with Naxals the previous day -- the biggest massacre in more than a year that also left 31 injured.

Police had on Saturday said five security personnel were killed in the encounter and 18 were missing. Two of the five bodies were recovered on Saturday itself, they had said.

The remaining three bodies and also the bodies of 17 of the 18 missing jawans were recovered on Sunday, police said, adding a search operation is underway to trace the missing jawan.

The dead include eight from the District Reserve Guard (DRG), seven from the CRPF's Commando Battalion for Resolute Action (CoBRA), six from the Special Task Force and one from the 'Bastariya' battalion of the CRPF," Inspector General of Police (Bastar range) Sundarraj P told PTI.

The missing jawan belongs to the CoBRA unit, he said.

He said the anti-Naxal operation was launched based on the intelligence inputs about the presence of Maoists of PLGA (Peoples' Liberation Guerilla Army) Battalion No. 1 led by Hidma, a Naxal commander involved in many deadly attacks on security forces.

He rubbished reports of "a meticulously planned Naxal ambush", adding, "Security forces fought bravely and inflicted a heavy blow to the ultras during the face-off".

Another senior police official said the Naxals, around 400 in number, were strategically positioned on a hillock in front of Tekalguda village and around it.

The security personnel came under heavy fire following which a few moved to the deserted village to take defensive positions where the Naxals lay in wait, the official said.

Visuals from the spot showed bodies of the slain jawans lying in the field and on the village streets.

An eyewitness said the bodies of the security personnel had bullet wounds and also had wounds inflicted by sharp weapons.

Eighteen jawans were missing after five security personnel were killed on Saturday in the fierce gun battle with Naxals in a forest along the border between Bijapur and Sukma districts in Chhattisgarh, police said.

"On Sunday, bodies of 17 missing personnel were recovered during a search operation," the official said. Some weapons of the security forces were missing, he added.

In a major joint offensive, separate joint teams of security forces, comprising over 2,000 personnel, launched an anti-Naxal operation from Bijapur and Sukma districts in the South Bastar forests, considered as a Maoist stronghold, on Friday night.

The operation was launched from five places - Tarrem, Usoor and Pamed (in Bijapur), and Minpa and Narsapuram (in Sukma), the official said.

When the patrolling team dispatched from Tarrem was advancing through the forest near Jonaguda, around 500 km from the state capital Raipur, it was ambushed by cadres of PLGA battalion of Maoists and a gun battle ensued, he said.

Chhattisgarh's Deputy Inspector General (anti-Naxal operation) O P Pal on Saturday said some jawans, both from the police and paramilitary were reported missing after the encounter, adding efforts were on to trace them.

Pal had claimed that the Maoists suffered a huge loss in the gunfight. Only the body of a woman Naxal could be recovered from the spot amid heavy exchange of fire.

The attack comes after the March 23 incident when five DRG personnel were killed as the Maoists blew up a bus carrying the security personnel with an IED in the Narayanpur district of the state.

On March 21 last year, 17 security personnel were killed in a Naxal ambush in the Minpa area of Sukma district.

On April 9, 2019, BJP MLA Bhima Mandavi and four security personnel were killed after Naxals blew up their vehicle with an IED in Dantewada district.

On April 24, 2017, 25 CRPF personnel were killed in a Naxal ambush in Burkapal area of Sukma district.

In March 2017, 12 CRPF jawans were killed in a Maoist attack in Sukma district.

In November 2016, two CRPF jawans were injured in a pressure bomb blast triggered by Naxals in the dense forest of Sukma district.

As many as 14 of the 27 districts in Chhattisgarh are affected by Left Wing Extremism violence.

The Union home minister condoled the death of the security personnel in the encounter and said their valour will never be forgotten. The government will continue its fight against the enemies of peace and progress, he added.

"The killing of the security personnel while battling Maoist insurgency in Chhattisgarh is a matter of deep anguish. My condolences to the bereaved families. The nation shares their pain and will never forget this sacrifice," he tweeted.