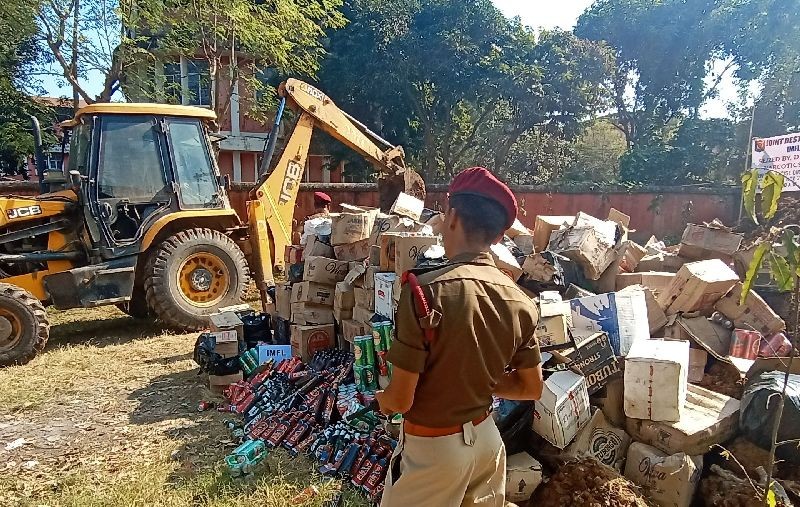 Confiscated contrabands including assortment of liquors and codeine-based cough syrups bottles are seen in this file photo taken during the disposal of such seized items by the Directorate of Excise, Nagaland, in November 2019. (Morung File Photo)
Morung Exclusive
9th September 2020

In 2019, Nagaland reported ‘zero’ convictions under the Nagaland Liquor Total Prohibition (NLTP) Act as well as the Nagaland Excise Act, as per the ‘Prison Statistics India 2019’ report released by the National Crime Records Bureau (NCRB).

In addition, as of December 31, 2019, the state also had no undertrial prisoners (UTPs) being tried for offences under the two Acts categorised as Special and Local Laws (SLLs) Crimes.

However, a total of six other offenders were convicted during the same period under SLLs Crimes—three for offences under Narcotic Drugs and Psychotropic Substances (NDPS) Act and one each for offences under ‘Arms/Explosive– related Acts,’ ‘Prevention of Corruption Act’ and ‘Other SLL Crimes.’

Altogether, there were 118 inmates serving time in the State prisons, while the number of UTPs was 314.

A total of 52 were on trial for other offences under SLLs.

Five UTPs are also being tried for offences categorized as ‘Other SLL Crimes.’

One conviction for extortion
In another interesting status, there was only one conviction in 2019 for ‘extortion,’ as opposed to the many arrests made by the police, and flashed in the news media, for extortion related offences.

This may come as a big surprise for citizens as the number of arrests, as reported by the enforcement agencies, stands in stark contrast to the rate of conviction.

However, the NCRB data stated that, among the undertrial prisoners, there were 34 persons being tried for ‘extortion’ as of December 31, 2019.

Queried on the ‘zero conviction’ under the NLTP Act as reflected in the NCRB data, an official of the Department of Excise & Prohibition replied that the department has magisterial authority or serves as a “quasi judicial body” when it comes to liquor offences.

Conferred with this authority by the NLTP Act, most offences are disposed by imposing monetary penalty on the offenders , as specified in the Act, and the illicit liquor impounded for destruction.

The NLTP Act states that those in “contravention of the provision” of the Act may be punished “with imprisonment for a term which may extend to three years and also with fine,” there are different quanta of punishments.

The first offence carries imprisonment ‘not be less than six months, and fine’ while it is not to be less than nine months and fine for second offence.