'Nobody has done anything': Amazon indigenous group decries illegal mining 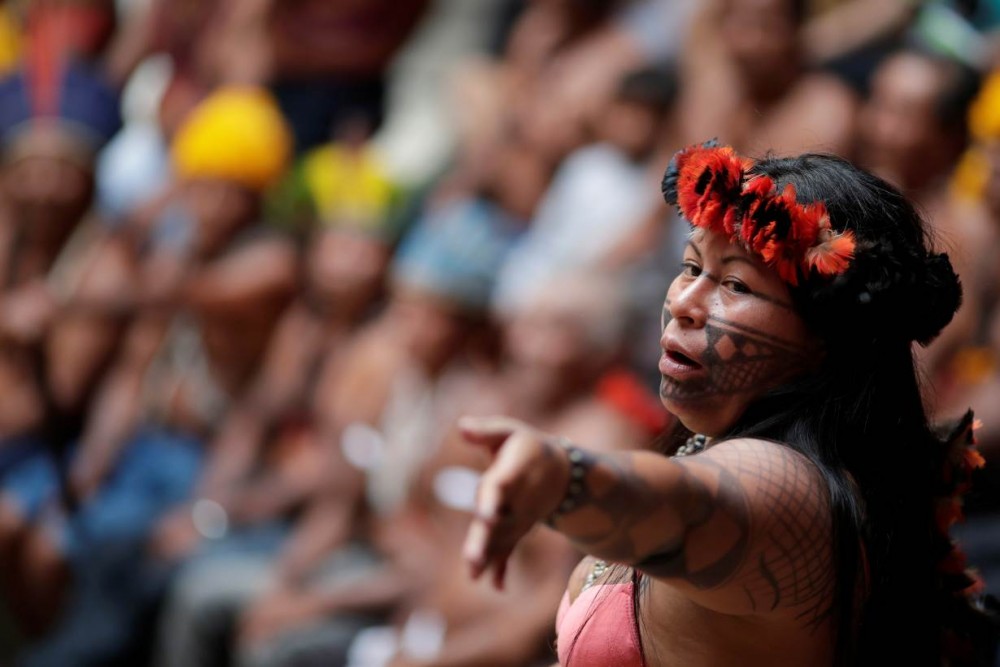 Munduruku indigenous leaders say their land is being invaded as gold prices rise, and efforts to fight the problem are inadequate

SAO PAULO, September 17 (Thomson Reuters Foundation) - An Amazon indigenous group that earlier turned away a planned hydroelectric dam is now battling a surge of illegal gold mining in its territory during the COVID-19 pandemic, a tribal activist said.

The Sawré Muybu territory of the Munduruku indigenous people, in Brazil's Pará state, has not been fully recognized as an indigenous reserve by Brazil's government - one reason it is particularly vulnerable, she said.

But indigenous leaders say they have organized to try to expel those mining and logging the land, even as government officials have said they believe there is indigenous interest in mining going ahead.

Alessandra Munduruku, a law student at the Federal University of Western Pará, in the Amazon city of Santarém, and a leader of the Munduruku people, said a group of indigenous women managed to expel loggers from one village along the Jamanxim River last year.

But in late August fire destroyed part of Karo Ebak, a rural cultivation area along the river, she said, ruining houses and sheds that served as meeting points for the Munduruku community.

"We have been denouncing (the invasions) for a long time, and nobody has done anything," she told the Thomson Reuters Foundation by phone.

The office of Brazil's Federal Prosecution Service said it had received the complaint and had launched an investigation at the Itaituba Attorney's Office but noted "we cannot give more details because the investigation has just started".

The latest damage comes a few weeks after Ricardo Salles, Brazil's environment minister, visited the municipality of Jacareacanga, one of the cities - along with Santarém, Itaituba, and Trairão - that edge the area where the Munduruku people live.

On August 5, Salles accompanied an operation by environmental protection agencies against illegal mining on Munduruku indigenous land, and met with a small group of indigenous residents in favor of mining.

In a video published online of Salles talking with indigenous mining supporters, one complains about the destruction of mining equipment.

After the meeting, the Ministry of Defense stopped operations against illegal mining in the area, though the ministry press office said they were resumed a day later.

"The situation is so serious that ... if the rate of invasion observed since the beginning of 2020 continues without interruption, it is possible that the situation will collapse and become irreversible," the service said in a press release.

The Ministry of Environment did not respond to repeated requests for its position on mining in indigenous territories and on Munduruku land.

Alessandra Munduruku said those in favor of mining did not represent the majority view of indigenous people in Munduruku territory.

"The minister says that he negotiated with the indigenous people. How can you say that, if we are almost 14,000 and he spoke with only a half dozen?" she asked.

A group of 18 Munduruku indigenous chiefs subsequently sent a letter to the Federal Prosecution Service saying they rejected gold mining in their territory, she said.

Luísa Molina, an anthropologist and researcher in the Sawré Muybu territory, said Salles' trip to Jacareacanga suggested the government is "trying any way to regularize mining on indigenous land".

Maurício Torres a geography professor at the Federal University of Pará, called the weakening of environmental inspections under the Bolsonaro government "a huge incentive for the looting of indigenous lands".

The Sawré Muybu indigenous land, which covers about 178,000 hectares (440,000 acres) in the Tapajós River basin is recognized as indigenous territory by the government but has not been officially demarcated, which means it does not have legal protection as a reserve exclusively for indigenous people.

But the Munduruku have worked to defend it, including in 2016 helping to defeat parts of a plan for 43 hydroelectric plants in the basin.

In particular "mega projects like the São Luiz do Tapajós plant, which would directly affect the Sawré Muybu indigenous land," were turned away, Molina said.

The project would have caused "monumental damage" to the Munduruku reserve, including destroying some of its sacred sites, she said.

Efforts to build the plant were suspended after the federal indigenous affairs agency called the project "impractical" due to its large-scale impact on Munduruku territory.

Munduruku people had protested the project for years, traveling to the capital Brasilia for government meetings and drawing national and international attention to the impact the project would have on their land.

But efforts to build hydroelectric dams in the Tapajós river basin continue.

In late May, the Brazilian government extended until the end of 2021 a deadline for studies on building three other hydroelectric dams in the Tapajós basin.

As well as hydroelectric plants, government and private investors are also planning other projects in the region, including a port on the Middle Tapajós River, agribusiness expansion and a railroad line to export soy from Mato Grosso state.

The government "has a series of projects (and) logistical and transport plans which are articulated, and are linked to large miners' interest," Molina said.

Alessandra Munduruku said her people should have the right to a say about proposed changes to the land that has been theirs for generations.

"What is a democracy like if you don't have the right to express your opinion about the territory, the river, the forest?" she asked.