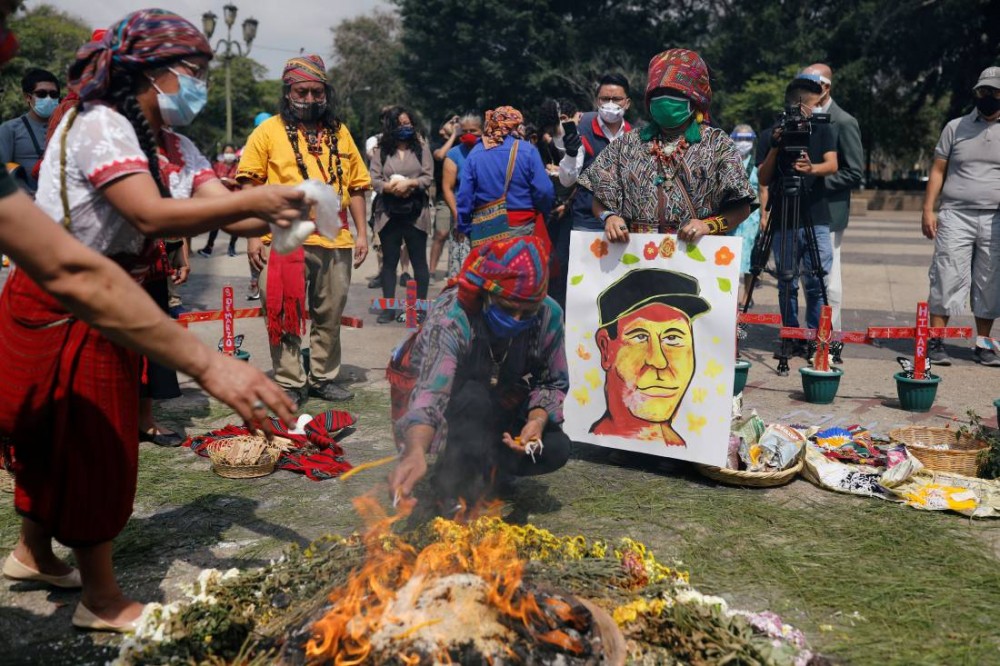 Mayan indigenous people take part in a ceremony in memory of Domingo Choc, a 56-year-old practitioner of traditional Maya medicine who was set ablaze by a mob accusing him of witchcraft, at the Parque Central in Guatemala City, Guatemala June 10, 2020. REUTERS/Luis Echeverria

Sparked by the murder of healer Domingo Choc, the #GuateRacista movement is an attempt to bring discussions of race and identity into the open

BOGOTA, June 17 (Thomson Reuters Foundation) - Hundreds of Guatemalans have shared their experiences of everyday racism on social media after the murder of an indigenous healer by a mob who accused him of witchcraft and set him on fire.

The killing of Domingo Choc, 56, provoked outrage among indigenous Guatemalans, who are mostly descended from the Mayan civilization and make up about half of the country's population of 18 million.

The movement, under the trending hashtag #GuateRacista (#RacistGuatemala), marks a rare attempt to bring discussions of race and identity into the open in the Central American nation and come as anti-racism protests spread around the world.

Simon Antonio Ramon recalled how one teacher at his school demanded that only Spanish and not Qʼanjobʼal, a Mayan language, be spoken in class.

"Someone could ask where is the racism in this. It's in the education system, in not allowing the use of the language," he tweeted.

Others shared how their parents decided not to teach them their native language to avoid insults.

"My mother and father didn't want me to suffer like them. So they decided not to teach me K'iche'. Racism was thus killing their way of communicating," tweeted Jose David Lopez.

Others spoke of the stigma that comes with having an indigenous name and said some Guatemalans did not even try to  pronounce their surnames correctly.

"Before marrying, someone told my mum that she should think carefully about marrying my dad. Because surely for her children to have an 'Indian surname' would be shameful for them.

"But no, here I am, Andrea Ixchiu Hernandez, proud and honoring my origin despite this #GuateRacista," tweeted Hernandez.

Sara Curruchich, a popular Guatemalan indigenous singer, tweeted she had received online threats in the past for discussing the racism faced by indigenous people, prompting messages of support.

"If only you were in front of me so that I'd be able to put a bullet in your head, the only thing you are doing is dividing the country," tweeted Curruchich, referring to the threat.

Indigenous women also discussed feeling marginalized in society, and when they are included it is tokenism.

"#GuateRacista is also arriving at an event or group and realizing that you're the only indigenous man or woman and that they've invited you so they look inclusive or to fill a quota," tweeted historian Maria Aguilar V.