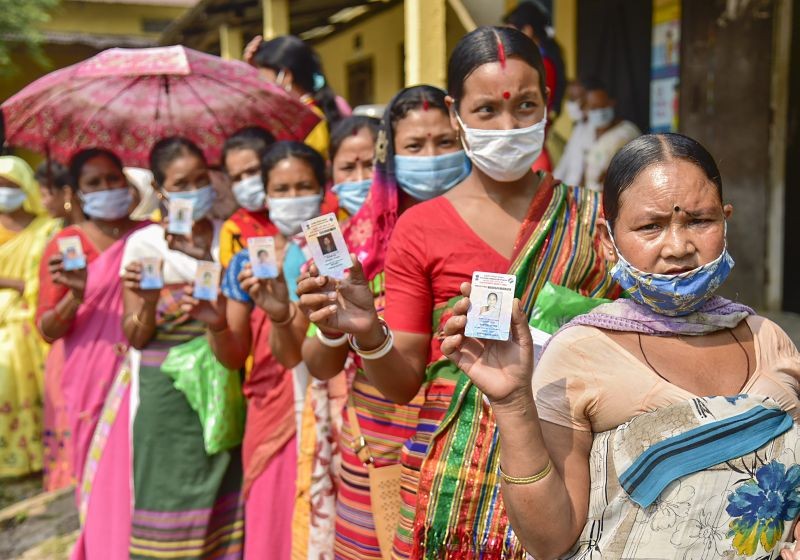 Hajong tribal women show their voter identity cards as they wait in the queue to cast their votes at a polling Station for Assembly polls, at Boko in Kamrup district on April 6, 2021. (PTI Photo)
North-East
6th April 2021

GUWAHATI, APRIL 6 (IANS): Over 61 per cent voters have exercised their franchise till 2 p.m. in the third and final phase of the Assam Assembly polls, conducted in 40 constituencies amid tight security, according to election officials.

Tuesday's balloting would decide the fate of 337 candidates, including 25 women aspirants.

All Covid-19 protocols for the voters including social distancing and thermal screening are being maintained.

Election officials said that no untoward incident was reported from anywhere of the 12 western Assam districts, bordering Bhutan, West Bengal and Arunachal Pradesh, where balloting is underway peacefully and smoothly.

The voters comprising men, women and the first time electorates, in large numbers queued up in front of the polling stations well before they opened at 7 a.m.

The polling would continue till 6 p.m. without any break as the Election Commission has extended an hour in view of the Covid-19 induced situations.

According to the state's Chief Electoral Officer Nitin Khade, a total of 79,19,641 voters, including 39,07,963 women electorates, are eligible to cast their ballots across 9,587 polling stations in 6,107 locations.

Khade told the media that around 32,000 Central Armed Police Forces, along with thousands of state security force personnel, have been deployed to maintain law and order during this phase in which 45,604 polling personnel were engaged to conduct the polls.

Tuesday's electoral battle is crucial for the ruling Bharatiya Janata Party (BJP) and the opposition Congress as both the parties won 11 seats each in the 2016 Assembly polls.

Both the BPF and the AIUDF this time are part of the Congress-led 'Mahajot' (grand alliance).

In the last elections, the BPF was with the BJP and the AIUDF fought independently.

Sarma, convener of the BJP backed anti-Congress body North East Democratic Alliance, is contesting from the Jalukbari seat from where he has consecutively won since 2001.

Meanwhile, Dass is contesting from the Patacharkuchi seat. In the 2016 elections, he was elected to the Assembly from the Sorbhog constituency.

Nearly 81 per cent of the 73,44,631 voters exercised their franchise in the second phase across 39 constituencies on April 1.

The results will be declared on May 2.