New Delhi/Srinagar, September 21 (IANS): A year after the central government's assurances that the nullification of Article 370 would lead to transparency and accountability, Jammu & Kashmir's public sector recruitment remains a major source of disillusionment.

"We were promised that merit will be a priority, regional disparity will vanish and favouritism, corruption and nepotism will be eliminated from J&K. None of the commitments have been kept," Muneeb, an entrepreneur in Srinagar said.

JKPSC (Public Service Commission) and JKSSB (Service Selection Board) are two major recruiting agencies of Jammu Kashmir. J&K Bank is the third largest source of employment. Immediately after the reorganisation of the erstwhile state of Jammu & Kashmir on August 5 last year, the JKPSC conducted interviews, almost challenging the new Constitutional formations of Union territories of Jammu & Kashmir and Ladakh. As it became a controversy, while replying to the Raj Bhawan, JKPSC admitted that the interviews conducted were not legitimate.

As per the documents accessed by IANS, JKPSC accepted that between the period of October 31 till November 21 last year, the commission conducted interviews. JKPSC Chairman Latif uz-Zaman Deva-led appointments were questioned by the then Governor in public.

Sources told IANS that several members of the commission have alleged that signatures on the declared results are forged. A police enquiry was ordered but forensic results are pending till today. Regular demands for completing the investigation have fallen on deaf ears, sources said.

An official source in JKPSC said it was common sense to conduct fresh interviews but the General Administration Department this year on July 13 asked the commission whether any material difference would occur, in case the decisions taken by the previous commission are re-opened at any stage.

"Did the J&K government even have any authority to seek response on this issue? Subsequent to the constitutional amendments, J&K became a UT last year. And as per the Reorganisation Act, a new PSC was to be constituted," an official said.

Frustrated by the process, Touseef, a social activist in Kupwara said, "It has been almost a year but the fate of the youth hangs in balance. Since Independence, J&K has been fed with packages after packages but the resentment has only multiplied manifold. Because only a few are favoured, plum jobs are shared among select families and backdoor employment has been rampant."

The Kashmir Administrative Service (KAS) 2008 results, for example, have come under the scanner of the J&K High Court. On July 18, this year, the High Court ordered the administration to produce records of the selection process of 2008. Incidentally, on August 12 this year, a fire broke out in the JKPSC office. Since then, what all records were destroyed in the fire has been a matter of speculation.

Similarly, the issue of seniority in the KAS has remained unresolved for last several years. In the last decade several High Court orders have been ignored. The Verghese and Vyas Committee reports are yet to see the light of day despite scathing High Court orders.

Former Lieutenant Governor G.C. Murmu had set up a committee to decide seniority of KAS. The KAS seniority committee observed in its reports that principle of natural justice demands that no officer should be put to disadvantage. It recorded that Establishment-Cum-Selection Committee headed by Chief Secretaries took decisions to induct some officers of certain services, clearly putting several others to disadvantage. However, the committee, according to sources was silent on backdoor appointments.

A bureaucratic tussle erupted over the appointment of an outgoing General Administration Department Secretary as a member in JKPSC. Sources told IANS that the senior-most officer of the state (Chief Secretary B.V.R. Subramaniam) ensured his appointment despite resentment in all official circles.

Similarly, in J&K Bank, recruitment has its own problems. The Institute of Banking Personnel Selection conducted the bank exams professionally and a merit list was prepared. However, it dawned upon authorities later that the final selection was to happen on the basis of a district-wise merit list and not at the state level.

"So those selected under the merit list, may not necessarily be selected when district-wise merit list are drawn. Does this happen anywhere else in the country?" Shaheen, a graduate student from Anantnag lamented.

The minorities in J&K are equally suffering. An engineering degree issued by the UGC and approved by the NAC-accredited university has been questioned by authorities on the pretext that the 1997 rules don't have provisions, sources said.

"The High Court orders to take decisions in set time frame are ignored, and it takes years of struggle to get a job for which you are eligible. It is a curse to be born in a minority community in Jammu & Kashmir," Aruna Kaul in Jammu said.

Same district transfers and postings for married couples in states and central government services is normal rule. "However, in J&K under the PM package employees are discriminated against, by creating contradictory rules within rules," Archana Bhat, who was employed in Kashmir under the package, said.

"Youth in J&K have been under tremendous pressure because of the last three decades of violence. Government jobs are few to come by. Process of selection is lengthy and arbitrary. Minorities feel discriminated against and are alienated. Private sector jobs are difficult to come by as administration is averse to any new investment. We had great expectations but all we have got is apathy, broken promises and betrayal," Javaid, a post-graduate looking for a government job, told IANS. 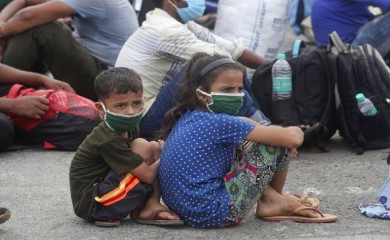