"How do you wished to be remembered when you are gone?", my colleague, Sanzu Bachaspatimayum  asked Kaka as we were about to leave. We had just completed our interview at his humble Mission Compound House. That was sometime in 2013.

He thought for a while, returned Sanzu's gaze and said, "As someone who was not afraid to speak the truth.

Kaka was unequivocally a distinct and a towering voice for the Naga nation. He was  dogged, charismatic and courageous. When his detractors came with threats and guns,he met them squarely, unarmed, only with his moral conviction and the power of truth. He would pay the price for his conviction. But even at the risk of his own life, he spoke the facts of the Naga history, the understanding of their history and the security of their human dignity and identity.

"Kaka’s imagination and energy is uncontrollable, it can either destroy or keep him alive", his aunt Leno Terhüja once told me of him.

Somehow it seems to also sum up  our Naga story.

For when we listen to the stories of our struggle, sometimes it is difficult not to think like we all  live our lives as martyrs  at the altar of Naga nationalism - a magnificent  rising  that has made us  a proud nation and peoples,  but also one that has sometimes  pushed us to the brink.

An indomitable force in life, Kaka's voice that spoke 'truth to power,' remains, even though he is gone.

It was his  book - "Nagaland and India- The Blood and the Tears," that introduced me to the atrocities of the Indian Army. That was  almost 20 years ago.  I had the privilege of sitting and listening to him speak some of the  stories in the  book in a gathering in Kohima. He had just published the book. After the talk I remember going out and buying a copy from  the 'Bible House' -  a copy for myself.  For some weeks, my elder  brother and I could only talk about the unimaginable suffering that took place in our land in the hands of the Indian Armed Force. It was an eye opener for us. And I would say for many.

Kaka, through that book alone, gave  voice,  respect and  dignity  to  countless of ordinary Naga men, women and children  who sacrificed, suffered and died for our aspiration for freedom and self-determination. The book was a  tribute to his nation that he loved so much. It was also  a statement of Nagas coming of age, as a nation ready to speak, write and face  her past and her future.  It was an unapologetic statement that Nagas will no longer live in fear of the repercussions of the power of the state for speaking out and holding up the mirror of her actions  to the biggest democracy in the world.

We did not realised it then, but on hindsight we now can only imagine what a toll it must have taken on Kaka to  write the book and then take that role of resistance and defiance against 'the powers that be'. The self-publication of his book, ''Nagaland and India - The Blood and Tears" is not only his magnum opus, but also a strong cultural  and political announcement for the Nagas.

When a great person dies, the nation mourns and say, “we shall not seetheir likes again”.   I beg  to differ. Because I believe Nagas despite the challenges and confusion, we will rise again - above all these.

And we will still see the likes of Kaka from Khonoma, from every Naga villages, and from all the corners of the Naga homeland - uncontrollable in imagination and energy; indomitable in spirit. And yes, individuals who eschew violence and  can  speak 'truth to power' without fear. And yes,  a new  Naga generation will rise  who based on the facts of our history will take on the Naga national struggle based on the principles of  non-violence, inclusive participation  and  people-centred  power,where the culture of guns and violence would be challenged and addressed. And when detractors come with threats and guns,  we will face them squarely, unarmed but with our moral conviction and the power of truth. 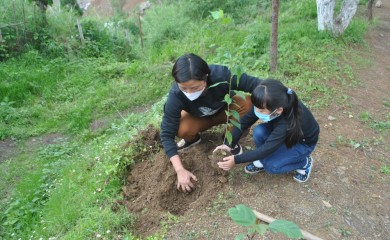