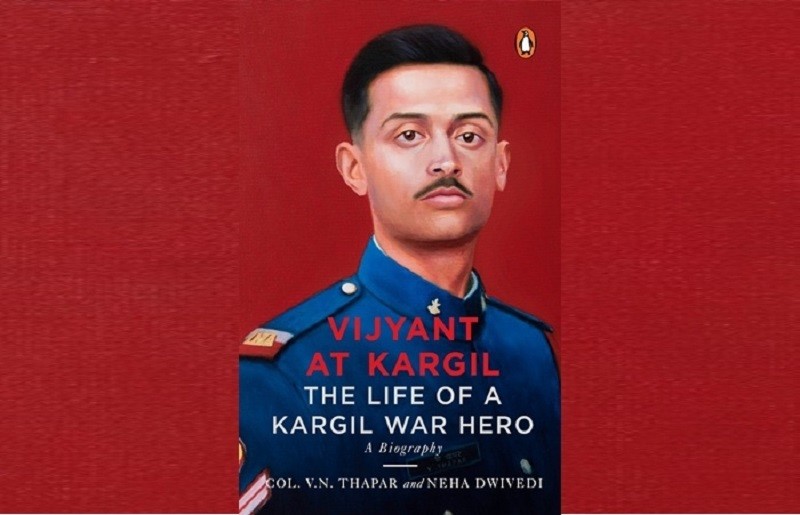 New Delhi, July 26 (IANS) Captain Vijayant Thapar of 2 Rajputana Rifles was awarded a Vir Chakra, the nations third highest medal for gallantry for having fought bravely the crucial battles of Tololing and Knoll in the Kargil sector of Jammu and Kashmir during the 1999 war with Pakistan.

His story, that provides a rare glimpse into the heart of a brave soldier has now been immortalised in "Vijayant At Kargil, The Life of a Kargil War Hero", co-authored by his father,

A fourth-generation Army officer, Vijayant dreamt of serving his country even as a young boy.

In this first-ever biography, published by Penguin, the reader learns about his journey to join the Indian Military Academy and the experiences that shaped him into a fine officer. The anecdotes from his family and close friends come alive, giving an insight into the exceptional young man that Vijyant was.

His inspiring story, as the nation observes Kargil Diwas Day (Sunday, July 26), provides a rare glimpse into the heart of a brave soldier. His legacy stays alive through these fond memories and his service to the country.

Kargil Diwas Day marks the gallant victory of the Indian armed forces against Pakistani intruders between May-July 1999 in the Dras, Kargil and Batalik sectors of western Ladakh.

Did Viajayant have a premonition about his death as the fierce battles raged? It would seem so from the last letter he wrote to this parents: "By the time you get this letter I'll be observing you all from the sky. I have no regrets, in fact even if I become a human again, I'll

join the Army and fight for my Nation."

"A nation requires heroes to sustain itself. War in Kargil produced one such hero, Captain Vijayant Thapar. Coming generations have a right to such a rich legacy which they can lean on. He lived and died for the conviction that India is great, an 'Idea' worth dying for. His life and thoughts must be preserved and passed on to the next generation. This book, written by a soldier father on a soldier son, is but a pause for new heroes will emerge from the ashes of Vijyant," Col. Thapar said of the book.

Learning about the heroic act of an individual is fascinating, however learning about his/her journey can be truly inspirational, Dwivedi said.

"At a time, when the need of the hour for us as a generation is to be able to look beyond 'self' the story of a young 22 year old hero, Captain Vijayant Thapar, who didn't just grow up with the ingrained ethos of service before self, but went on to put his countrymen, his unit and lastly his friends before his own life, is exactly what we need to read. This is for every young individual, that goes to bed with the same dream every night- that of making a difference," she added.

"I knew it had to be told," Roshini Dadlani, the editor of the book said.

"The Kargil War took so many of our brave soldiers, and it's important to remember them. And that's what this book does. Though Vijayant's gone, he lives on through his bravery and the wonderful memories his friends and family have of him," she added.