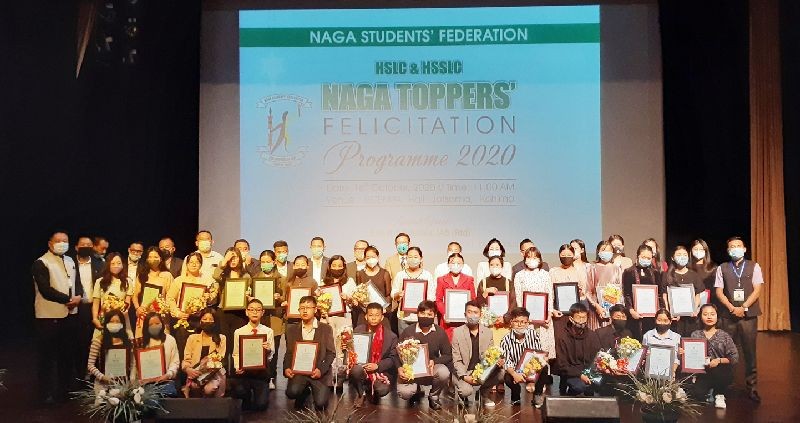 The appeal was made during the felicitation programme for Naga HSLC & HSSLC toppers organised by the NSF which was held at RCEMPA Hall, Jotsoma on October 16.

While reminding the gathering that the Government has already agreed in principle to mainstream the SSA & RMSA teachers of 2010 and 13 batches in October 2018, Sukhalu stressed that the task is not as simple as signing a piece of paper.

“A massive exercise has to be undertaken by the department and is still continuing. It is a painstaking task and such thing takes time. The task was further delayed due to the COVID pandemic. However the government will continue to work to bring this to a logical conclusion and where justice will not be denied,” assured the School Education Advisor.

Further with the COVID cases spiking in Nagaland, Sukhalu noted “this is perhaps not the right time to be agitating.”

“We have a bigger and more urgent crisis to first overcome. In view of the circumstances, the government cannot give time frame for implementing the proposal but you may be assured that the decision of the government will be implemented,” he added.

Excess number of teachers
The Advisor also highlighted some issues confronting the education sector in Nagaland—a major challenge being the general perception of preferring private schools above government schools which has led to a decrease in the enrolment in government schools.

Excess teachers in government schools in Nagaland was also highlighted, where Sukhalu pointed out that as per the national average (one teacher for 32 students), Nagaland requires only 9000 teachers. However, the State currently has 20,000 teachers inclusive of SSA and RMSA.

“Government teachers are well qualified and trained. However they don't seem to inspire the parents and children including their own children to study in government schools,” said Sukhalu. The Advisor noted that the State needs to ponder over this matter and close down schools that do not have any enrolment or to merge schools that have very low enrolment.

In this regard, he asked the NSF to ensure that teachers are doing their job and not indulging in activities such as keeping proxies.

He meanwhile stated that with the global pandemic, the dynamics of people’s lives have changed and urged the need to adapt to the changing times.

Inculcating the habit of reading was stressed by the Advisor who espoused that reading can open up one's “mind to the best of human experience, wisdom and knowledge; the kind of knowledge that has stood the test of time, and will give you the confidence to face the challenges of life and come out successful”.

Toppers encouraged to better society
Meanwhile, acknowledging the efforts of the toppers, NSF President, Ninoto Awomi also congratulated the parents for instilling the right vision and discipline in the minds of the students. Awomi expressed hope that their achievement bears great testimony of their future ahead.

While Naga society has produced many degree holders, and brilliant students, Awomi stated that unless these achievements are used for the betterment of society, it will be just another degree. “Become the best version of yourself,” he advised.

In total, 69 Naga HSLC and HSSLC toppers were felicitated including five Naga toppers from Manipur.