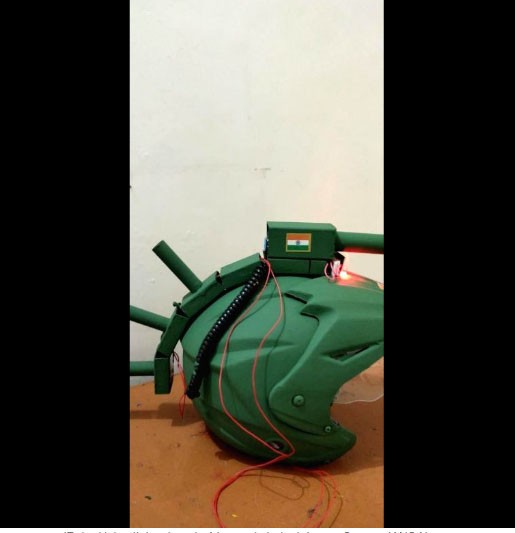 VARANASI, AUGUST 14 (IANS): A student from Prime Minister Narendra Modi's parliamentary constituency of Varanasi has developed a helmet that can help to strengthen security forces. The 'Robo Helmet', which works on radio signals can remotely fire at enemies in war-like situations.

The remote operated device equipped with wheels, micro gun and wireless system can also enter in the opponent's area and open fire.

Anjali Shrivastava, a student of the Ashoka Institute of Technology and Management, hopes that the 'Robo Helmet' will surely prove to be a revolution in terms of border security.

"The Robo Helmet will prove to be a revolutionary invention for security forces. It is specially designed to strengthen troops. However, it is a prototype right now, but we have sent a requisition to the Ministry of Defence so that we can make it more powerful," she said.

In an exclusive conversation to IANS, Shrivastava said: "It is designed for the safety of soldiers. If someone tries to attack a soldier from the rear then it would generate signals and alert the soldier. A wireless fire trigger is connected with the barrel fitted in the helmet through radio frequency. This trigger can be attached with any kind of rifle to launch fire. If anyone tries to attack the soldier from behind then the helmet would alert him and he could open fire in the rear direction with the help of the wireless trigger." The light-weight, remote actuated helmet is capable of moving 360 degrees. The prototype version can be operated through remote within a range of 50 metres while the gun in it can fire up to 100 metres, Shrivastava said.

She added that it took her 15 days to make this device at an expense of around Rs 8,000. The device can also be charged with solar energy.

Shyam Chaurasia, in-charge of Ashoka Institute of Technology and Management, said they had prepared the prototype of the 'Robo Helmet'.

Senior scientist from Regional Science and Technology Centre, Mahadev Pandey said that it's a good invention and can prove really helpful for the soldiers adding that the DRDO (Defence Research and Development Organisation) should analyse and encourage such inventions to realise the 'Aatmanirbhar Bharat' dream.