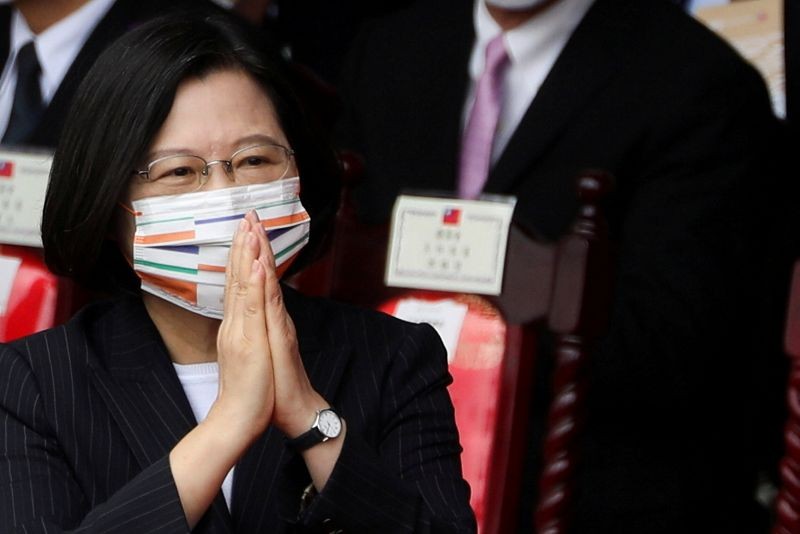 TAIPEI, October 10 (Reuters): Taiwan wants to have "meaningful dialogue" with China on an equal basis, President Tsai Ing-wen said on Saturday, extending an olive branch at a time of heightened military tension with Beijing, which claims the island as sovereign Chinese territory.

Democratic Taiwan has come under increasing pressure from Beijing, which has ramped up air force activity near the island in the past few weeks, including crossing the Taiwan Strait's sensitive mid line that normally serves as an unofficial buffer zone.

China says it is responding to "collusion" between Washington and Taipei, angered at growing U.S. support for the self-governed island. Beijing views this a precursor to Taiwan declaring formal independence, a red line for China.

Speaking at National Day celebrations, Tsai described the situation in the Taiwan Strait as "quite tense." This, along with disputes in the South China Sea, a China-India border conflict and China's crackdown in Hong Kong, showed democracy and peace in the region were facing big challenges, she said.

If Beijing can heed Taiwan's voice and jointly facilitate reconciliation and peaceful dialogue, regional tension can surely be resolved, she added.

"As long as the Beijing authorities are willing to resolve antagonisms and improve cross-strait relations, while parity and dignity are maintained, we are willing to work together to facilitate meaningful dialogue," Tsai said.

But China, which cut off a formal talks mechanism in 2016 after she first won office, said on Saturday that Taiwan continued to pursue independence and still held a confrontational mindset.

Tsai said she was committed to maintaining stability in the Taiwan Strait, but that this was the responsibility of both sides.

Still, she has made strengthening Taiwan's armed forces a priority, and said she would keep pushing this, upholding the principle of neither seeking war nor fearing it.

"Our commitment to our sovereignty and democratic values will not change, but we will also maintain strategic flexibility and be responsive to changes," she said, without elaborating.

The United States has been pushing Taiwan to modernise its military so they can become a "porcupine", hard for China to attack. Washington, like most countries, has no formal diplomatic ties with Taipei, though it is its strongest global backer.

"These speeches continued the confrontational thinking and hostility, advocated 'independence' comments, and clamoured to connect with external forces," said Zhu Fenglian, spokesperson at the Taiwan Affairs Office in Beijing.

"'Taiwan independence' is a dead end, while confrontation will lead to nowhere," Zhu warned, urging Tsai's Democratic Progressive Party to refrain from going further down the "wrong path".