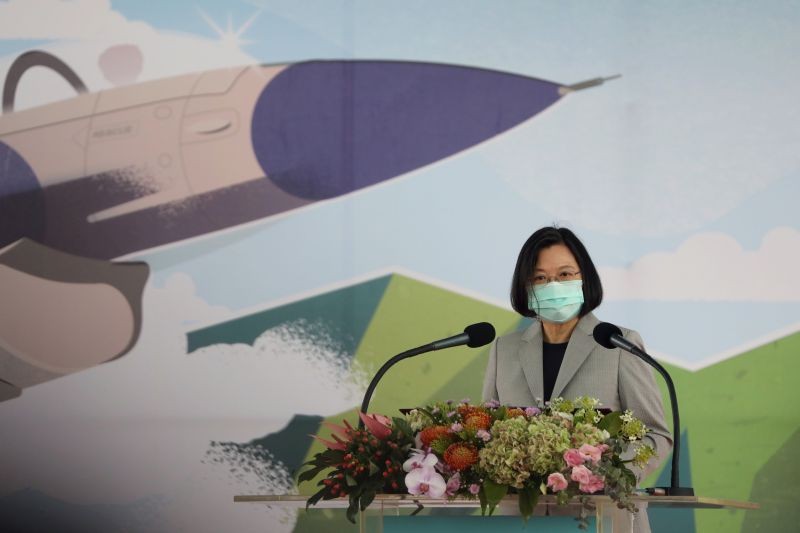 PENGHU, Taiwan, September 22 (Reuters): Taiwan President Tsai Ing-wen praised on Tuesday the "heroic performance" of air force pilots who have been intercepting Chinese jets that have approached the island, as its armed forces held drills to simulate repulsing an attack.

Tension between China and the democratic island Beijing claims as sovereign Chinese territory have spiked to their highest in years, with Taiwanese fighters jets scrambling to intercept the Chinese aircraft last week.

Visiting a major air force base on Penghu in the sensitive Taiwan Strait that divides the two sides, Tsai told pilots and engineers she was aware of their "heroic performance" when intercepting and driving away Chinese aircraft.

"I have a lot of confidence in you. As soldiers of the Republic of China, how could we let enemies strut around in our own airspace?" she said, using Taiwan's formal name.

"I'm aware that facing the provocative behaviour of the communist planes that have encircled the island and damaged regional peace in recent days, your duty at the front line of the airspace in Penghu must be even heavier."

The base, now home to F-CK-1 Ching-kuo Indigenous Defence Fighters (IDF) which first entered service in 1997, is at the front line of Taiwan's response to Chinese military intrusions.

Wang Chia-chu, one of the senior officers of the "Heavenly Colt" IDF squadron, told Reuters there is just five minutes' time to scramble fighters once Chinese aircraft are spotted.

"We will defend our airspace in real time as long as there's a threat," Wang said.

Another senior officer, speaking on condition of anonymity, told Reuters the Penghu-based IDFs are now scrambling "almost every day" as tension run high.

The air force also put on display its new Wan Chien air-to-ground cruise missiles that entered service in 2018 and can be fired from IDFs at targets about 200 km (125 miles) away, putting Chinese facilities or approaching ships in their sights.

"The enemy threat grows by the day," it cited Yen as saying. "On no account allow the enemy to step out of line, and defend the country's sovereignty, democracy and freedom."

Unusually, Chinese aircraft last week breached the mid line of the Taiwan Strait, an unofficial barrier for combat aircraft of both sides, though they have not flown over mainland Taiwan.

In Taipei on Tuesday, Wu called the line an important "symbol" for avoiding military clashes.

"We demand the international community strongly condemns China's words and actions and demand the Chinese government stops everything that it has been doing," he added.

China has been angered by stepped-up U.S. support for democratic Taiwan, including a visit to Taipei last week by U.S. Undersecretary for Economic Affairs Keith Krach.

Taiwanese fighters have scrambled many times this year to intercept Chinese aircraft.