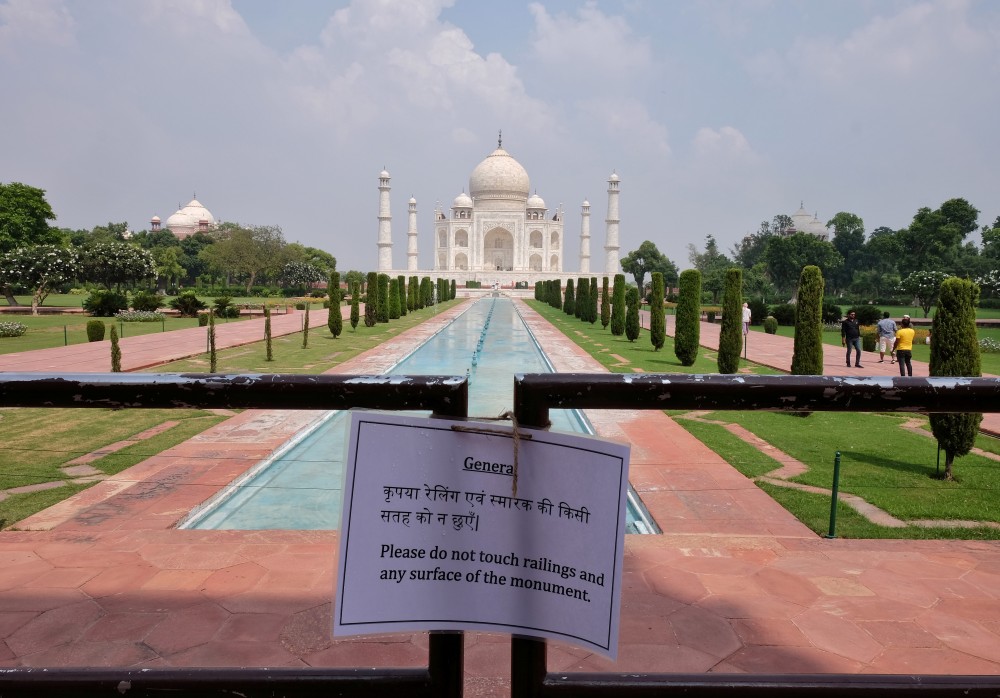 A notice is tied to a railing inside the premises of Taj Mahal after authorities reopened the monument for visitors, amidst the coronavirus disease (COVID-19) outbreak, in Agra, India, September 21, 2020. (REUTERS/Alasdair Pal)
India
21st September 2020

AGRA, September 21 (Reuters): India reopened the Taj Mahal after six months on Monday, with the first visitors trickling into the famous monument as authorities reported 86,961 new coronavirus infections across the country, with no signs of a peak yet.

The white marble tomb in the city of Agra, built by a 17th-century Mughal emperor for his wife, was opened to the public at sunrise, and a Chinese national and a visitor from Delhi were among the first to enter.

Daily visitor numbers have been capped at 5,000, versus an average of 20,000 before the pandemic. Tickets are only being sold online, with fewer than 300 bought on the first day.

Visitors will have their temperatures taken and must adhere to advice to keep a safe distance from each other.

Aditya Diksha, one of the early visitors at the Taj, said he and his friends drove 12 hours from central India and stopped in Agra on their way to the mountains in the north.

"It is the first time in six months we have been out, so it feels good," he said.

Workers at the Taj were sanitising the handrails while paramilitary police shouted at tourists not to touch any of the surfaces.

"We are following all COVID-19 protocols," said Vasant Swarnkar, superintendent of the Archaeological Survey of India, which oversees the Taj among other monuments.

India's coronavirus tally of 5.49 million infections is second only to the United States with 6.79 million, a figure the South Asian nation could overtake in the next few weeks at its current rate of increase.

But as a proportion of its population, India's toll is still small compared to countries such as the United States, Brazil and Britain.

Faced with the deepest economic contraction in decades, the government of Prime Minister Narendra Modi is pushing to free up virus curbs so that jobs and businesses can resume.

"We can survive for another four to six months: after that we will have to take some serious calls," said Abid Naqvi, who saw bookings at his boutique hotel in Agra drop to zero overnight after India's abrupt lockdown in March.

Until then, the 13-room Ekaa Villa, which opened last year at a cost of almost $1 million, had been operating at close to capacity.

However, foreign tourists were unlikely to return until at least April, said Manu PV, secretary of the Association of Tourism Trade Organisations India, a month that traditionally signals the end of the tourist season.

And a confusing system of regional lockdowns and quarantine rules is deterring domestic tourists.

"People don't want to go on holiday," Manu said. "They are very worried. There is the fear factor."