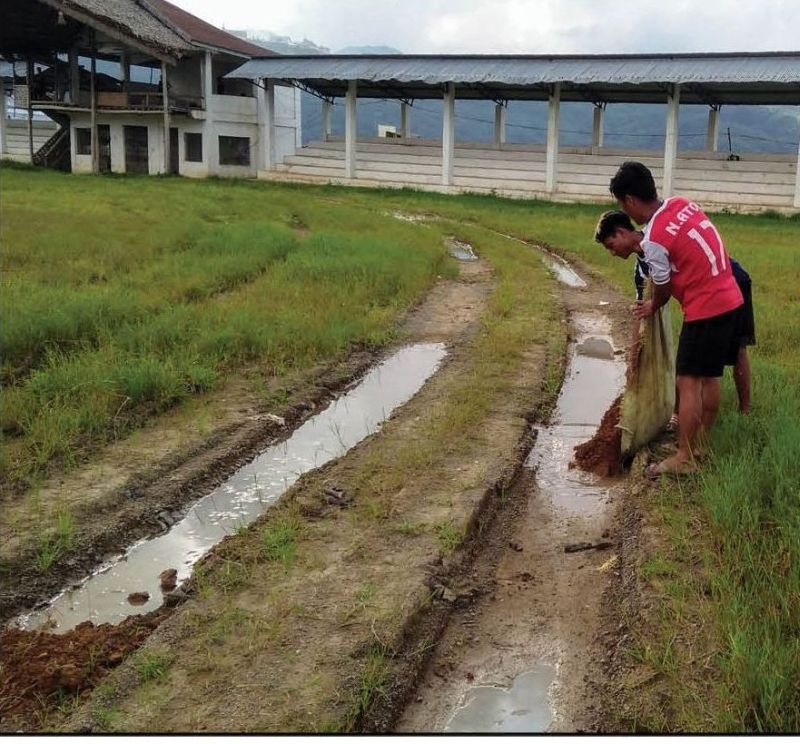 Some of the players filling up the tire tracks inside the ground. (Morung Photo)

A view of the Loyem Memorial Ground after the repair work carried out by the players. (Morung Photo)

While the COVID-19 pandemic has dampened most activities, it has also brought out the importance of every individual’s contribution towards community building and betterment.

In the second part of this two part series, The Morung Express highlights how a section of youth came together to give the district sports complex a facelift.

The District Sports Complex in Tuensang also known as Loyem Memorial Ground used to be a dumping site. In 2017, the Confederation of Chang Students’ Union under the aegis of Organizing Committee, Loyem Memorial Trophy undertook the initiative to repair the ground in order to organize the trophy.

Many sports enthusiasts, especially football players of the town would visit the ground every morning and evening for practice.

However, after the last edition of Loyem Memorial Trophy in 2019, the ground underwent a drastic change.

With the ground being used for various social events and unauthorized driving lessons inside the complex, the result was big gaping holes and uneven surfaces making it almost impossible for the players to practice at ease.

Having resolved to improve the condition of the ground, around 14 footballers gathered at the complex. “One day some of my teammates and other players decided to level the ground and clear it. We were only 14 of us but our work was no less,” said one of the players who took part in the work.

Equipped with dao and spades, they cleared the tall grasses and litter and proceeded to fill and level the ground’s surface.

“We could work for almost 4 hours only since we were less in number and the ground is too big. Though there will be no big football tournaments this year but we have to stay fit and keep playing to stay in touch with the game,” said another player who volunteered for the initiative.

After a hard day’s work, they managed to cover up the worst affected parts of the ground and now players are able to practice and use the complex with ease.

The Confederation of Chang Students’ Union (CCSU) is also organizing a penalty shoot-out on November 19 and 20 and now the players have something to cheer about despite being unable to play full tournaments.

Chingmak Kumchuba, President of CCSU commended the youth for their work.

“It is learnt that few young football talents came together to maintain the ground; as such, the CCSU genuinely appreciates the job done and we believe that this small gesture will bring about an impact to this town where every soul cries out for football,” he said.

Further, the CCSU appealed the citizens of Tuensang to avoid driving practices inside the ground so as to avoid damaging the pitch.