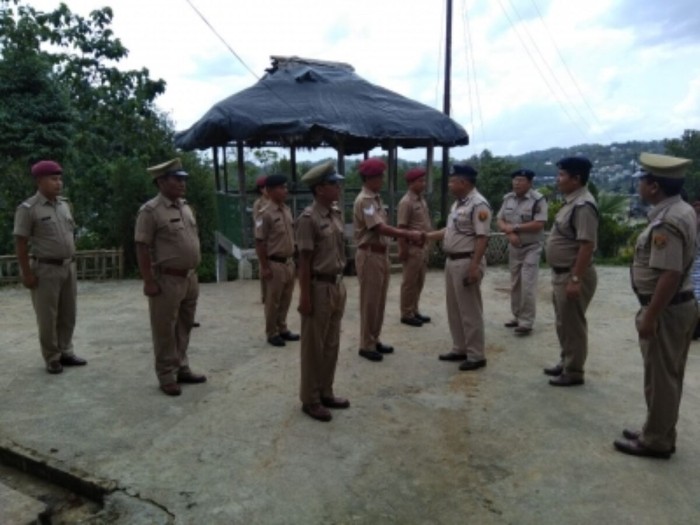 Silchar (Assam)/Aizawl/Agartala, October 18 (IANS): The situation on the Assam-Mizoram border took an ugly turn in the past 48 hours with many shops and houses burnt and over 50 people injured, officials said on Sunday.

Security was also beefed up along Tripura-Mizoram border and prohibitory orders promulgated, even as the Tripura authorities stopped reconstruction of a temple at the disputed Phuldungsei village on the inter-state border.

On the Assam-Mizoram border tension, Deputy Inspector General of Police, Southern Assam, Dilip Kumar Dey said that Cachar district police have approached their Mizoram counterparts in a bid to dispel the problem and prevent clashes between people from both sides.

Explaining the cause, Dey, talking to IANS over phone, said that a Covid-19 testing centre was set up at Mizoram government at Lailapur, 1.5 km into Assamese territory, on Friday, to test samples of Mizoram-bound truckers and other people.

"The testing centre was set up unilaterally and under the pressure of Mizoram's NGOs," he said, adding that the Cachar police had strongly objected to setting-up of the centre without permission of the Assam government.

Following this, some youths from Mizoram came to Lailapur on Saturday and attacked the truck drivers, villagers and burnt more than 15 small shops-cum-houses, the DIG said.

On the other hand, villagers of Mizoram's Mamit district, which is contiguous to Assam's Cachar, told the media that miscreants from Cachar came to their villages and attacked shops and houses, causing huge damage.

A police official in Cachar also said that more than 50 people, mostly truck drivers, were injured when assailants from Mizoram threw stones and bricks on them.

Following the violence, a huge contingent of security forces led by Cachar's Superintendent of Police Bhanwar Lal Meena are camping in the border areas.

More than 200 Mizoram-bound goods vehicles, mostly trucks, are now stranded in Cachar district and their drivers and owners refused to enter Mizoram without proper security, the DIG said.

However, volunteers of the Young Mizo Association (YMA), a powerful NGO of the mountainous state, have been providing food to stranded drivers and their helpers in Mizoram.

There was also tension on the Mizoram-Tripura border over proposed reconstruction of a "temple" by an indigenous organisation of Tripura in a village claimed by both states.

Mizoram's Chief Secretary Lalnunmawia Chuaungo said in Aizawl that the state government has taken precautionary measures along its border with Tripura in Mamit, following huge public resentment in view of the temple issue.

According to Mamit district officials, prohibitory orders under section 144 of CrPc were clamped in Phuldungsei, Zampui and Zomuantlang villages on Friday.

"The deployment of security forces was done in view of the controversy over the rebuilding of a temple. However, there is no untoward incident yet or any kind of tension in our side," Chakraborty told IANS on Sunday.

Mizoram Home Secretary Lalbiaksangi, in a letter to her Tripura counterpart Barun Kumar Sahu, said that the Survey of India has been requested to facilitate the joint spot verification with both state government to resolve the inter-state boundary issue at the earliest.

The letter, dated October 9, said that the Mizoram government has received reports that Tripura-based organisation, Songrongma, is trying to construct a temple at the "disputed inter-state border village near Phuldungsei" and contended that the area is under Mamit district.

Chandran, in her letter to Reang, said: "... the undersigned regrets to inform you that such permission cannot be granted. As you are already aware, such large congregations are prohibited in the country in the context of spread of Covid-19. There is apprehension of a breakdown of law and order and communal clashes as there is a boundary dispute between Tripura and Mizoram in the area and the Phuldungsei village council has objected to the plan.

"A path of discussion and reconciliation involving all the stakeholders is necessary on the issue and you are instructed to not undertake any such activities without the prior permission of the authority taking into account the sensitive nature of the issue involving different communities and strategic locations of Phuldungsei."

Phuldungsei has populations of both the Hindu Reangs (locally called 'Bru') and Lusai (Mizo), who are Christian.

The SDM had earlier written to North Tripura District Magistrate, saying that the whole Phuldungsei village, despite its eastern side falling in Mizoram, had been accepted as part of Tripura, and emphasised the urgent need to demarcate the exact inter-state boundary to incorporate it.

Meanwhile, Reang said that the makeshift temple has existed since 1943 at Phuldungsei village and the Lusai demolished it and put up a cross in 2013, while continuously preventing temple priest Mangaljoy Reang, 68, from performing worship.

"I have communicated the matter to the leaders of VHP and RSS and they would take up the matter with the Tripura government and appropriate authority," Reang told IANS.