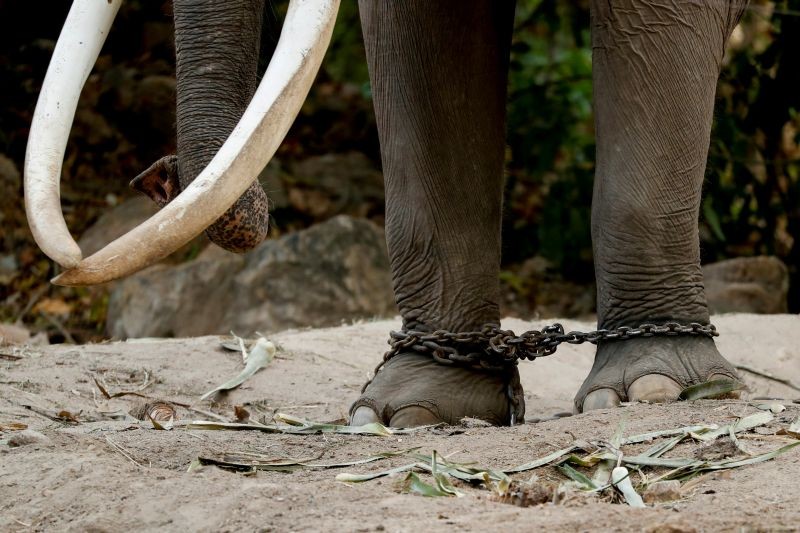 An elephant is seen chained at his enclosure at Khao Kheow Zoo in Chonburi, Thailand on November 30, 2019. (REUTERS File Photo)
World
29th June 2020

BANGKOK, June 29 (Reuters): Undercover video obtained for an investigation into alleged animal cruelty shows baby elephants in Thailand taken from their mothers then exposed to abusive training methods to perform tricks for tourists, according to a wildlife charity.

The videos capture what the charity said was three training teams breaking the spirit of elephants to wean them from mothers to make them submissive, and able to learn tricks like walking on hind legs, painting on a canvas and spinning hoops on trunks.

Thailand's environment minister on Monday told Reuters animal cruelty would not be tolerated and if the footage was authentic, swift action would be taken against the perpetrators.

The recordings feature eight elephants put through a four-step programme that the charity said was called "the crush", including making them hobble with chained legs, poking sensitive areas with bull-hooks or exposing them to busy highways.

The footage shows what the group said was the ordeal of one mother elephant, Gintaala, who has been separated over time from each of her four calves in turn.

"Elephants they are together ... They walk in herds and they look after each other. So, doing things like that is very inhumane," said Roatchana Sungthong, country manager for World Animal Protection.

Elephants have been a source of national pride and cultural identity for Thailand throughout its history, used for labour, transport and in battlefield triumphs by warriors and kings.

Environment minister Varawut Silpa-archa said animal cruelty was unacceptable and urged any group with information or evidence of abuses to come forward immediately.

"Because these kind of things, you know, a second delayed it means the life and death of these animals," he said.

Laithongrien Meepan, an elephant expert and owner of an elephant camp in Ayutthaya north of Bangkok, said he believed the videos were staged and showed outdated methods that were formerly used on elephants caught in the wild.

Laithongrien, whose camp has not been accused of abusive practices, said elephant handlers would not use such methods.

"Those video clips are fake and it was a setup. Who would do such things? To me, there is no reason to do that," he said of the techniques.

World Animal Protection's Roatchana said the video was real and not a set up.