U.N. warns of dangerous drop in vaccinations during COVID pandemic 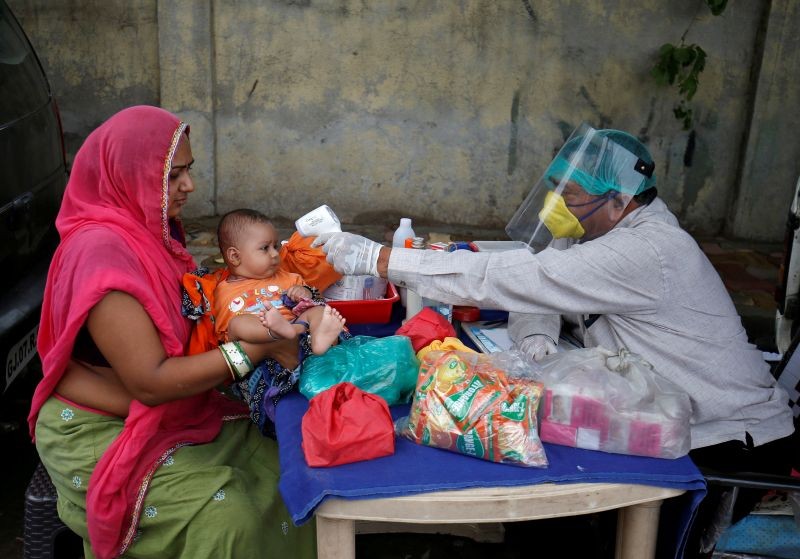 A doctor wearing a protective face shield uses an infrared thermometer to measure the temperature of a child at his mobile health clinic, after his clinic and its adjoining areas were declared a micro-containment zone, after authorities eased lockdown restrictions that were imposed to slow the spread of the coronavirus disease (COVID-19), in Ahmedabad on June 15, 2020. (REUTERS File Photo)

LONDON, July 15 (Reuters): Levels of childhood immunisations against dangerous diseases such as measles, tetanus and diphtheria have dropped alarmingly during the COVID-19 pandemic, putting millions of children at risk, United Nations agencies said on Wednesday.

"The avoidable suffering and death caused by children missing out on routine immunisations could be far greater than COVID-19 itself," World Health Organization (WHO) director general Tedros Adhanom Ghebreyesus said in a joint report with UNICEF.

Three-quarters of the 82 countries that responded to a survey for the report said they had suffered coronavirus-related disruptions to their immunisation programmes as of May 2020.

Most problems were linked to a lack of sufficient personal protection equipment (PPE) for health workers, travel restrictions, and low health worker staffing levels - all of which led to immunisation services being curbed or shut down.

At least 30 measles vaccination campaigns have been or are at risk of being cancelled, threatening new outbreaks of the contagious viral disease this year and beyond, the report said.

Measles outbreaks were already on the rise, infecting nearly 10 million people in 2018 and killing 140,000 of them - mostly children, according to WHO data.

For diphtheria, tetanus and pertussis, preliminary data for the first four months of 2020 "points to a substantial drop" in the number of children getting all three doses of the DTP vaccine that protects against them, the report said - the first time in 28 years that the world could see a fall in coverage for this routine childhood immunisation.

Data for 2019 showed that nearly 14 million children worldwide missed out on life-saving vaccines. Most of these children live in Africa and are likely to lack access to other health services, the report said.

It said progress on immunisation was already stalling before the new coronavirus emerged and spread around the world, but the pandemic made a bad situation worse.